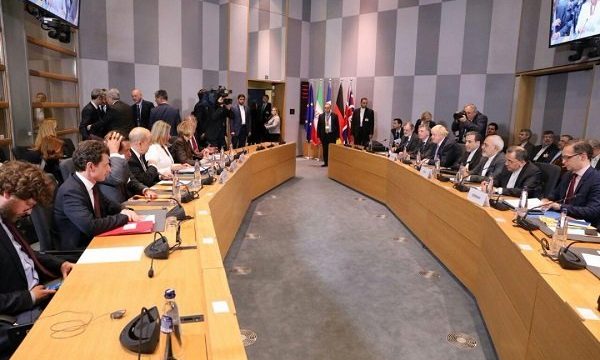 Press TV – The European Commission is set to launch a legal process based on a powerful law to block American sanctions against Iran as European Union powers mobilize to save the landmark 2015 nuclear deal following Washington’s unilateral pullout.

Jean-Claude Juncker, head of the EU’s executive body, said Thursday that the Commission will begin the process of activating Blocking Statute at 10:30 a.m. on Friday.

The Statute, which was adopted in 1996, refers to a law that makes it illegal for any European Union company to comply with US sanctions.

“As the European Commission we have the duty to protect European companies,” Junker told a news conference after a meeting of EU leaders in Sofia, Bulgaria.

“We also decided to allow the European Investment Bank to facilitate European companies’ investment in Iran. The Commission itself will maintain its cooperation will Iran,” he added.

Speaking at the same press conference, President of the European Council Donald Tusk also noted that the 28-nation bloc will remain committed to the Iran deal, officially called the Joint Comprehensive Plan of Action, despite Washington’s much-criticized decision to abandon the multilateral agreement.

The EU, he added, has instructed the European Commission to defend the interests of European firms dealing with Tehran from US sanctions if needed.

During a speech on May 8, US President Donald Trump announced that Washington was withdrawing from the Iran deal and would revive the economic sanctions against the country, including those targeting its oil sector and transactions with the Central Bank of Iran (CBI).

The White House was also quick to slap a series of bans on a number of Iranian individuals and entities, including CBI Governor Valiollah Seif.

The other signatories condemned Washington’s attack on the Iran deal and unanimously said they would still abide by their commitments under the international document.

In turn, Tehran said it will stay in the agreement for now and will enter fresh negotiations with the remaining parties to see if they can preserve the deal and ensure the Islamic Republic’s economic interests enshrined in the accord without the US.

Iran has said the European sides must give assurances that its economic interests would still be met under the deal, which removed the economic sanctions against Tehran in early 2016 in exchange for Tehran to limit certain aspects of its nuclear program.

In Brussels, the top Iranian diplomat hailed talks with the European Union as a “good start,” adding, “We are on the right track … a lot will depend on what we can do in next few weeks.”

The European Union had earlier said it could go to the World Trade Organization (WTO) if the US took steps to hurt its businesses in Iran.

EU firms rife with fear of US bans

Washington has in recent days stepped up its campaign of fearmongering among the European firms, threatening them with punitive measures should they fail to stop dealing with Iran when American sanctions return.

White House national security adviser, John Bolton, said over the weekend that US sanctions on European companies that maintain business dealings with Iran were “possible.”

Days later, the French oil giant, Total, said it would pull out of a huge gas project in Iran, which started in July 2017, unless it would obtain a waiver from the US authorities with the support of France and the European Union.

Siemens (SIEGY) CEO Joe Kaeser has also said his company could not do any new business in Iran after the US decision.

That is not, however, the case with Russian and Chinese firms as Beijing and Moscow have moved to strengthen their economic ties with Tehran even further.

In the Kazakh capital Astana, the Russia-led Eurasian Economic Union trade bloc signed an interim trade deal with Iran that lowers tariffs on hundreds of goods. The bloc also plans to begin three years of talks with Iran that aim to create a free trade zone.

Meanwhile, Iranian Oil Minister Bijan Zanganeh has said that Chinese state-owned oil company, CNPC, is ready to take the place of Total on a major gas field project in Iran if the French energy giant pulls out.

“Under the prerequisite of not violating its international obligations, the Chinese side will continue to carry out normal and transparent practical cooperation with Iran,” said Chinese Foreign Ministry spokesman, Geng Shuang.