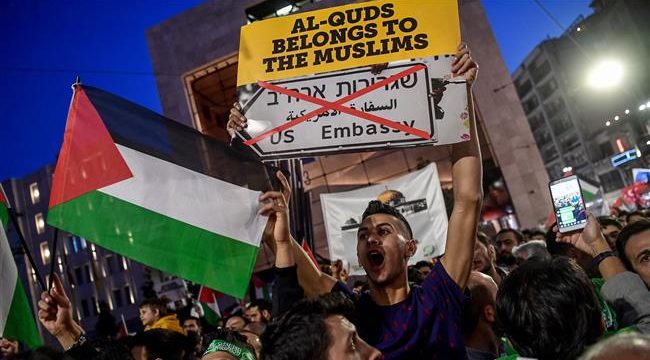 Press TV- Turkey has urged Islamic countries to review their ties with Israel after dozens of Palestinians were killed by Israeli fire on the Gaza border.

Turkish Prime Minister Binali Yildirim told his ruling party in parliament that Ankara would call an extraordinary summit of the Organization of Islamic Cooperation (OIC).

“Islamic countries should without fail review their relations with Israel,” Premier Yildirim said, adding, “The Islamic world should move as one, with one voice, against this massacre.”

Yildirim said that Turkish President Recep Tayyip Erdogan, who currently holds the rotating chairmanship of the body, called the OIC summit on Friday.

Yildirim said that after the summit at 3:00 pm a giant rally would be held at the vast Yenikapi meeting area in Istanbul under the slogan of “Stop the Oppression” to express solidarity with the Palestinians.

“This has nothing to do with party politics. This is to show solidarity, brotherhood and togetherness,” he said.

“The Islamic world should move as one, with one voice, against this massacre,” Yildirim added.

Ankara has reacted with fury to the killing Monday of 60 Palestinians in clashes and protests, on the same day as the United States formally moved its embassy in Israel to Jerusalem al-Quds from Tel Aviv in defiance of international outrage.

Ankara said it was recalling its ambassadors to the United States and Israel for consultations in the wake of the events.

On Tuesday, Israel expelled the Turkish consul in Jerusalem al-Quds.

The Foreign Ministry’s spokesman said the consul had been summoned and was told to return to Turkey “for consultations for a period of time.”

Yildirim earlier accused the US of sharing responsibility with Israel for a “vile massacre” along the Gaza border, during which dozens of Palestinians were killed by Israeli fire on Monday.

The United States took its place without complaint alongside the Israeli regime in “this massacre of civilians and became a party to this crime against humanity,” Yildirim told reporters in Ankara.

“This is … vile massacre and we condemn it strongly,” he added.

Turkish President Recep Tayyip Erdogan, during a visit to London, said that the United States had lost its role as mediator in the Middle East by moving its embassy to the occupied territories.

The Turkish president says the controversial move will ‘ignite an even greater fire’ in the occupied Palestinian territories.

President Erdogan later in a speech broadcast on Turkish state television accused Israel of carrying out a “genocide” as nearly 60 Palestinians were killed by Israeli forces in one day of protests.

The Turkish president accused Israel of being a “terrorist” entity and announced he would pull ambassadors out of Israel and the US.

“What Israel has done is genocide,” the Turkish president said, adding, “I condemn this humanitarian drama, the genocide, from whichever side it comes, Israel or America.”

He added: “We will continue to stand with Palestinian people with determination.”

Thousands gathered in Istanbul’s Istiklal Street to condemn the US’ decision to relocate its embassy to Jerusalem al-Quds and the Israeli bloodshed in the Gaza Strip.

The rally organized by several NGOs under the name “Raise Your Voice Against Occupation.”

Speaking at the event, organizers and speakers said that the relocation has reignited an awakening for Muslims and encouraged them to put up a fight against the Israeli occupation.

They also called for protests to continue throughout Muslims’ holy month of Ramadan outside the Israeli consulate in Istanbul.

Israeli gunfire killed 59 Palestinians and wounded over 2,700 in the Monday clashes, the highest toll in a single day since a series of protests demanding the right to return to ancestral homes began on March 30.

The embassy inauguration also coincides with the climax of a six-week demonstration on the 70th anniversary of Nakba Day (Day of Catastrophe), May 15, when Israel was created.

The occupied territories have witnessed new tensions ever since US President Donald Trump on December 6, 2017 announced US recognition of Jerusalem al-Quds as Israel’s “capital” and said Washington would move US embassy to the city.