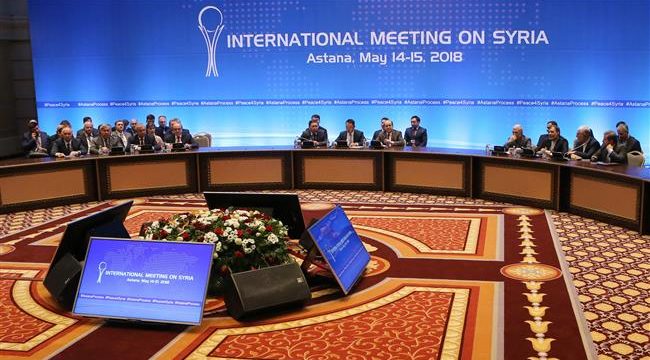 Press TV- The ninth round of crisis resolution talks between the Syrian government and armed opposition, mediated by Iran, Russia and Turkey, has come to an end in Astana, building a positive outlook for momentous follow-up negotiations.

At the end of the two-day talks in the Kazakh capital, the participants issued a joint statement, emphasizing the need to respect “the sovereignty, independence, unity and territorial integrity” of the crisis-torn Arab country.

The trio has been mediating the negotiations in the Kazakh capital since January 2017, a month after they joined efforts and brought about an all-Syria ceasefire. The three states act as the guarantors of the truce.

The Astana peace process has helped significantly reduce the violence in Syria through the formation of four de-escalation zones in the country, setting the stage for Syria’s warring sides to focus on negotiations on the political future of their homeland.

The final statement underlined the “key role” the four safe zones are playing in preserving the ceasefire regime, saying their demarcations, which were outlined in Astana last May, need to be respected.

It, meanwhile, reminded that the zones were “temporary,” and that their establishment was not to be misused towards undermining Syria’s territorial integrity.

Iran, Russia and Turkey hold talks in Kazakhstan with the aim of making progress towards a political solution to Syrian crisis.

They also reaffirmed their resolve to keep fighting the Takfiri terror groups operating in Syria, especially Daesh and al-Qaeda-affiliated militants.

The ceasefire’s guarantors “decided to hold the next high-level International Meeting on Syria in Sochi in July 2018,” it added.

The Russian resort city hosted the Congress of the Syrian National Dialogue in January, with 1,500 people representing the Syrian government and foreign-backed opposition in attendance.

The three mediators also committed themselves to continued consultations with the Syrian representatives and the United Nations Special Envoy for Syria Staffan de Mistura to pave the way for “the beginning of the Constitutional Committee’s work in Geneva as soon as possible.”

The committee is tasked with working to draft a revised constitution for Syria.

At the end of Wednesday’s talks, Alexander Lavrentiev, who is Russian President Vladimir Putin’s special envoy for Syrian affairs, said the presidents of Iran, Russia and Turkey are likely to meet in late August or early September.