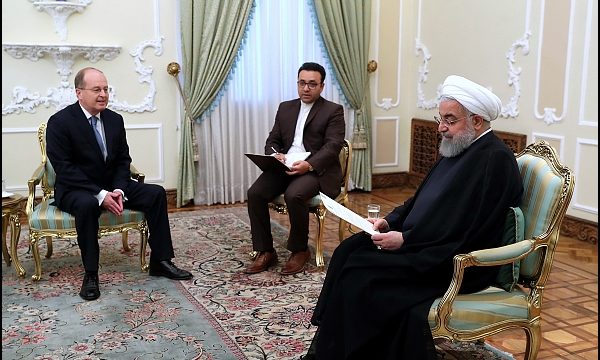 MNA– Iran’s President Hassan Rouhani has said that the US withdrawal from the nuclear deal and relocation of its embassy to al-Quds were two historic mistakes made by the US administration.

“History will judge that these two decisions have been very incorrect and imprecise towards Iran and the peoples of the region,” Iran’s President Hassan Rouhani said on Tuesday while meeting with the new ambassador of New Zealand to Tehran.

Referring to the objections of the global community towards these two decisions, Rouhani said “the first outcome of the incorrect decisions is Washington’s isolation in the public opinion of the world.”

With regard to the bilateral relations between Iran and New Zealand, President Rouhani stressed that Tehran welcomes development of friendly relations with Wellington and referred to the ample potentials for deepening of these relations.

He added “there are good potentials for development of relations between Iran and New Zealand that must be taken advantage of and Tehran is ready to cement scientific, commercial and tourism ties with Wellington”.

The Iranian president also appreciated the positive stances of New Zealand on the JCPOA and said “2015 was the year of success of politics and diplomacy over hostility and unfriendly relations among countries and the government of the Islamic Republic of Iran believes that constructive interaction with the countries of the world and adoption of a win-win approach will be beneficial for the entire world.”

Iran has always been committed to its obligations in the international stage, he said, adding that in the case of the JCPOA, 11 reports by the IAEA verify this and the US’ withdrawal from the deal is a political and moral defeat for the US administration.

New Ambassador of New Zealand to Tehran Hamish MacMaster presented his letter of credence to President Rouhani and stressed that Wellington was willing to deepen and cement relations with Tehran in all fields, especially economy.

He added “the two governments and nations of Iran and New Zealand have close, friendly relationship with each other and it is imperative that this relationship is further strengthened.”