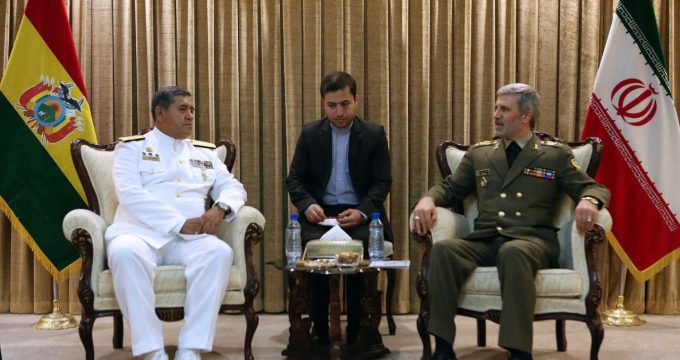 ISNA– Iranian Defense Minister announced that the Islamic Republic of Iran is ready to cooperate with friendly and independent countries and share its experiences in military, defense and technical fields with them.

Iranian Defense Minister Brigadier General Amir Hatami made the remarks during a meeting with Bolivian Commander in Chief of the Armed Forces Admiral Yamil Octavio Borda Sosa in Tehran on Tuesday.

“Latin America enjoys a special status in the foreign and defensive policy of the government and armed forces of the Islamic Republic of Iran. So we attach great importance to development military-defense relations with Bolivia,” General Hatami said during the meeting.

He also appreciated Bolivian government for supporting the Islamic Republic of Iran’s righteous positions on different issues such as Iran’s nuclear power at international communities and resolutions on human rights claimed by the United Nations, saying, “I believe the presence of independent countries such as Bolivia in the Security Council can contribute to strengthening the stability and security of the world”.

Emphasizing that Iran supports the independent policy of Bolivian President Evo Morales in international affairs, General Hatami added, “we believe that independent countries should have independent defense policies and in this regard, the Islamic Republic of Iran is proud to announce its readiness to cooperate with friendly and independent countries and share its experiences in military, defense and technical fields with them”.

Bolivian Commander in Chief of the Armed Forces, for his part, said, “We are eager to develop our relations with Iran in technological, scientific, industrial fields and use your Valuable experiences”.