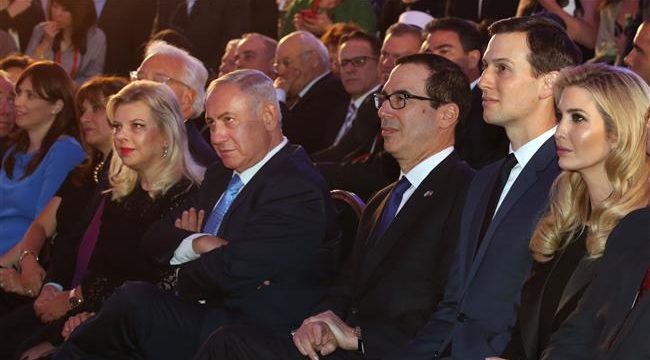 Trump’s daughter, son-in-law in Israel to open US embassy amid tensions

Press TV- US President Donald Trump’s daughter, Ivanka, has arrived in Jerusalem al-Quds to open the new US embassy in Israel, a controversial move that is guaranteed to stir violence in the occupied Palestinian lands.

Ivanka Trump landed in Tel Aviv’s Ben Gurion International airport on Sunday, where she was welcomed by US ambassador to Israel David Friedman.

Speaking to reporters, the US president’s daughter said she had “great joy” in going back to Jerusalem al-Quds, which Trump recognized as Israel’s new capital last September amid international uproar.

“We look forward to celebrating Israel’s 70th anniversary and the bright future ahead,” Ivanka wrote online, as she prepared to attend the opening ceremony on Monday, exactly seven decades after the Tel Aviv regime forced out Palestinians from their land and declared existence.

PressTV-Trump to address embassy opening in Quds by video

President Trump will address the opening ceremony of US embassy in Jerusalem al-Quds by video on Monday.

Ivanka was slated to attend a gala dinner later on with her husband, Jared Kushner, who has been tasked by Trump to negotiate an end to the Israeli-Palestinian conflict.

Most world countries have reportedly declined to attend an event next week marking the opening of the American embassy in Jerusalem al-Quds.

Only 32 of the 86 foreign ambassadors in Israel have accepted an invitation to attend the dinner. Interestingly, only four of those are European countries, namely Hungary, the Czech Republic, Austria and Romania.

The Trump administration has invited no foreign envoys to the main ceremony, which will be held on 4 p.m. local time.

Trump’s decision to move the US diplomatic mission to the ancient city has been met with outrage among Palestinians, who deem Jerusalem al-Quds as the future capital of a Palestinian state.

Only in Gaza, a coastal strip of land that has been under Israeli siege for a decade, thousands of people have pledged to partake in protests along border with Israel.

Protests in Gaza started on March 30 and have been regularly held over the past seven Fridays under the title of the “Great March of Return.”

Israel has shown a violent reaction to peaceful protests by Palestinians in Gaza Strip, killing close to 50 of them and injuring thousands over the past seven weeks.

Hundreds of people take to the streets of Jerusalem al-Quds to condemn the relocation of the US embassy from Tel Aviv to the occupied city on Monday.

The Gaza rallies will culminate on the 70th anniversary of the Nakba Day (Day of Catastrophe), which marks the creation of Israel on May 15, 1948.

Wary of inevitable clashes, the Israeli military has said it would double the number of forces around Gaza and in the West Bank before the opening ceremony.

Earlier on Sunday, thousands of protesters in Jordan, Turkey and Indonesia staged rallies to condemn the US decision.

Israeli and Palestinian residents of al-Quds held a separate rally on Saturday night, taking to the streets to voice their outrage.

Washington’s major European allies are also likely to skip the event and only send low-level representatives.