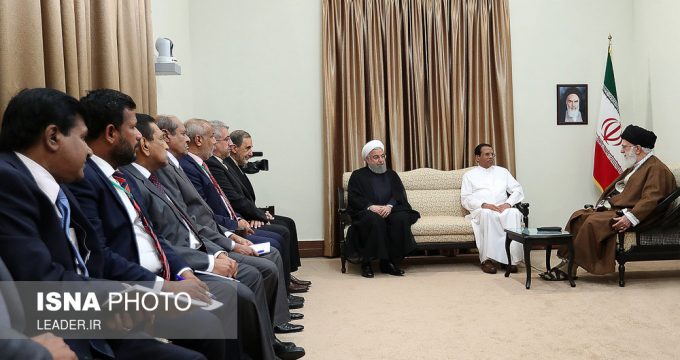 May 14, The Iran Project – Sri Lanka’s President Maithripala Sirisena heading a high-ranking politico-economic delegation arrived in Tehran on Sunday (May 13) and was officially welcomed by his Iranian counterpart Hassan Rouhani.

While in Tehran, he held talks with President Rouhani and was received by Leader of the Islamic Revolution Ayatollah Seyyed Ali Khamenei.

Following the signing of 5 MoUs on economic and cultural cooperation, Iranian and Sri Lankan presidents also attended a joint press conference in Tehran.

The MoUs deal with cooperation on fighting drugs, health and medicine, standard, film industry, and program of cultural exchanges between the two countries for a period of 3 years to further deepen bilateral relations.

Speaking at the presser, President Rouhani noted that the talks with President Sirisena focused on the sale of Iranian crude oil, petrochemicals, building blocks, as well as technical and engineering services.

He went on to express hope that the agreements reached in all sectors of economy and trade would be followed up during the upcoming joint economic commission’s meeting of the two countries in Tehran.

The Sri Lankan president, for his part, stressed the need for development of bilateral ties between the two countries, describing Iran as one of the major purchasers of his country’s tea, and a key exporter of crude oil.

He added that his government has put in a request for the import of more crude oil from Iran.

Elsewhere, he referred to Iran and Sri Lanka as the oldest and most senior members of the Non-Aliened Movement (NAM), saying that his country is committed to follow in the footsteps of NAM.

In a meeting with Sirisena, Iranian Leader said Asian countries should enhance cooperation in a bid to boost their strength.

“Asian countries must further cooperate and work with each other, because such cooperation will make them strong,” Ayatollah Khamenei noted.

The Sri Lankan president, in turn, said the two countries’ officials agreed to strengthen cooperation between the two states.

He added that Iran is among the most advanced countries in technical, scientific and academic areas and expressed hope that his country would benefit from the Islamic Republic’s achievements.

On May 14, Sirisena left the Iranian capital after a two-day visit to the country and was seen off by President Hassan Rouhani’s Deputy for Parliamentary Affairs Hosseinali Amiri.