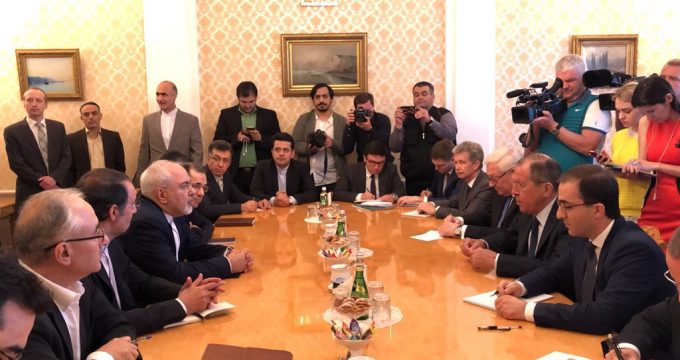 May 14, The Iran Project – Iranian Foreign Minister Mohammad Javad Zarif arrived in Moscow on Monday (May 14) to meet with his Russian counterpart Sergey Lavrov following similar negotiations in China and will later head to Brussels for talks with the EU foreign policy chief, Federica Mogherini, and his counterparts from the three European parties.

At a meeting with his Russian counterpart, in Moscow, the second destination on his diplomatic tour aimed at saving the nuclear deal, officially called the Joint Comprehensive Plan of Action (JCPOA), Zarif said Russia has confirmed its preparedness to respect the seven-party nuclear agreement reached in 2015 despite the US pullout.

Zarif further censured the US under American President Donald Trump for developing the habit of voicing opposition to international deals and regulations.

He said the deal “is based on the balance of obligations” between Tehran and the opposite side, including the US, and that after Washington’s pullout “this balance is undermined,” adding, “We should see how we can secure the interests of the Iranian people.”

Meanwhile, Lavrov said that Russia and Europe had a duty to “jointly defend their legal interests” in terms of the Iran deal.

“Unfortunately once again we see that Washington is trying to revise key international agreements as it happens to Joint Comprehensive Plan of Action, as it happens to Jerusalem (al-Quds) problem and a number of other agreements,” the top Russian diplomat said.

Lavrov also voiced support for Iran’s right to defend its “legitimate interests” as part of the agreement, which removed nuclear sanctions against Iran in early 2016 in exchange for certain limits to its civilian nuclear activities.

In a meantime, Zarif later told a joint news conference with Lavrov that “the final aim of these negotiations is to seek assurances that the interests of the Iranian nation will be safeguarded.”

Zarif also wrote on his Twitter account on Monday that: “Good and substantive meetings with counterparts in Beijing & Moscow; heading to meet with EU High Rep and E3 FMs in Brussels. Will soon determine how P4+1 can guarantee Iran’s benefits under the JCPOA, and preserve this unique achievement of diplomacy.”

After Moscow, he is slated to travel to Brussels to continue the JCPOA-related talks in the aftermath of the US walkaway from the key international deal.

Zarif was in Beijing on Sunday and held talks with Chinese officials, including his counterpart Wang Yi, on Iran nuclear deal.