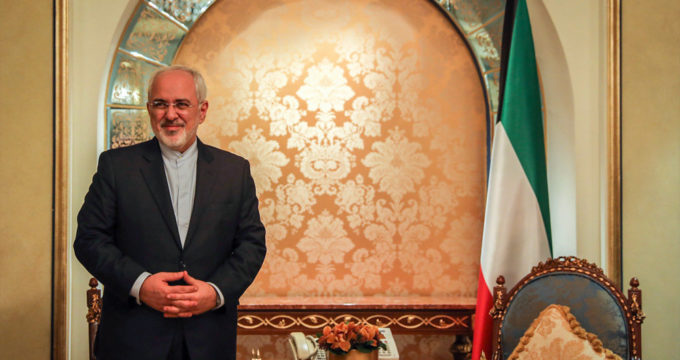 Press TV – Iran’s Foreign Minister Mohammad Javad Zarif has lashed out at the Israeli regime for pursuing a repressive approach to peaceful protests by Palestinians demanding their right to return to their motherland.

Taking to his official Twitter page on Monday, Zarif took Israel to task for “massacring countless Palestinians in cold blood as they protest in world’s largest open air prison,” in what was a direct allusion to the situation of the Palestinians who live under years-long Israeli blockade in the besieged Gaza Strip.

Israeli troops on Monday opened fire on Palestinians who have gathered near a Gaza fence for the climax of a six-week demonstration coinciding with the inauguration of US embassy in Jerusalem al-Quds.

In another part of his tweet, Iran’s top diplomat pointed to the move by the US President Donald Trump to transfer the US embassy from Tel Aviv to Jerusalem al-Quds despite global outcry against the move.

He added that as Israel continues its brutal crackdown on Palestinians “Trump celebrates move of US illegal embassy and his Arab collaborators move to divert attention. A day of great shame.”

The United States officially opened its embassy to Israel in Jerusalem al-Quds on Monday, despite warnings from around the world that the measure risks triggering a fresh wave of violence in the Middle East.

A senior Iranian official on Monday lashed out at the United States for taking an “illegal” action in moving its embassy in Israel from Tel Aviv to Jerusalem al-Quds, saying the US president has become the epitome of anarchism and violence in the international scene.

“Trump has turned into the symbol of anarchism and increasing violence on the international scene with his strategic mistakes in supporting terrorism, breaching the JCPOA (the landmark 2015 nuclear agreement, officially known as the Joint Comprehensive Plan of Action, signed between Iran and the major world powers) and other international pacts as well as violating the Palestinian people’s rights,” Secretary of Iran’s Supreme National Security Council (SNSC) Ali Shamkhani said.

In a speech at the White House in December 2017, the US president officially declared the disputed city of Jerusalem al-Quds as Israel’s capital.

Trump said, “I have determined that it is time to officially recognize Jerusalem as the capital of Israel. While previous presidents have made this a major campaign promise, they failed to deliver. Today, I am delivering.”

#FreePalestine, Israel, Mohammad Javad Zarif, US embassy in Jerusalem May 14, 2018
Iran’s FM Sends Letters to UN Chief, EU’s Mogherini on JCPOA
US president to announce ‘deal of century’ on Palestine within next few weeks: Nasrallah