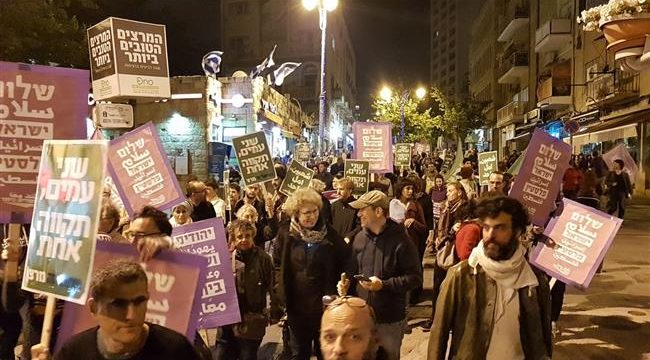 Press TV- Hundreds of Israelis and Palestinians have taken to the streets of Jerusalem al-Quds to voice their outrage at the relocation of the US embassy from Tel Aviv to the occupied city on Monday.

The demonstration took place Saturday night, with participants chanting slogans such as “Jerusalem, don’t give up, we will end the occupation.”

The protesters also called on Israeli Prime Minister Benjamin Netanyahu to step down and demanded an end to “escalating tensions, spreading hatred, and provocations that undermine a chance for peace.”

They shouted, “Netanyahu resign. Peace is worth more than you,” “Don’t set Jerusalem on fire,” “You don’t have any shame, there is no holiness in an occupied city.”

Israel claims the whole of Jerusalem al-Quds, but Palestinians consider the city’s eastern sector as the capital of their future state.

The US is scheduled to move its diplomatic mission to Jerusalem al-Quds on Monday despite international condemnation.

President Donald Trump announced the dramatic shift in Washington’s policy on Jerusalem al-Quds last December, saying the US was recognizing the occupied city as the “capital” of Israel.

Most world countries have reportedly declined to attend an event next week marking the opening of the American embassy in Jerusalem al-Quds.

The demonstrators denounced the so-called Jerusalem Day march planned for Sunday to mark the 51st anniversary of the Israeli occupation of East Jerusalem al-Quds during the 1967 Six-Day War. The Tel Aviv regime formally annexed the district in 1980 in a move not recognized by the international community.

“We’re fed up with cynical politicians who are trying to gain political capital at our expense,” said Sof Pitishi, one of the organizers of the protest.

Another demonstrator, Daniel Roth, said “messages of violent racism and deepening of the occupation are coming out to the forefront with the embassy move, with Jerusalem Day tomorrow.”

The protesters have gathered “to say enough of this, of any occupation, build a just peace, no more racism on the streets, no more violence on the streets. That’s why I’m here,” Roth pointed out.

On Saturday, Turkish Foreign Minister Mevlut Cavusoglu condemned the planned US embassy relocation to Jerusalem al-Quds, saying Ankara would continue to support the Palestinians’ right to the city.

“We need to take a common stance against this wrong decision. We are seeing some hesitance within the Arab League recently, which is a mistake,” Turkey’s state-run Anadolu news agency quoted Cavusoglu as saying.

The top Turkish diplomat further stressed that “even if every country remains silent on the al-Quds issue, Turkey will not.”

Russian Foreign Minister Sergei Lavrov also warned that the US decision on Jerusalem al-Quds has led to a deadlock.

“We are very concerned about the situation in the Palestinian-Israeli settlement; it is at a dead end. Moreover, the impasse is getting deeper, especially in light of the US decisions on Jerusalem,” Lavrov said at a meeting with UN Special Coordinator for the Middle East Peace Process Nikolay Mladenov in Moscow.

Palestinians gear up for protest

In the besieged Gaza Strip and the occupied West Bank, people are expected to hold a “major” protest rally on Monday, coinciding with the controversial opening of the US embassy.

The National Committee for the March of Return and Breaking the Siege called on Palestinians “to undertake a major gathering in the eastern parts of the Gaza Strip and at friction points with the occupation in the occupied West Bank, starting at 10 in the morning on Monday.”

The Israeli military said it would be doubling the number of forces around Gaza and in the West Bank.

The Israeli military says it will be doubling the number of forces around the Gaza Strip and in West Bank territories ahead of the controversial opening of a US embassy in Jerusalem al-Quds.

Since March 30, Gaza has witnessed Friday rallies, dubbed “the Great March of Return,” demanding the right to return for those Palestinians driven out of their homeland.

The Return rallies culminate on May 15, the day Palestinians commemorate Nakba Day (Day of Catastrophe) when hundreds of thousands fled or were driven out of their homes in 1948 and Israel was created.