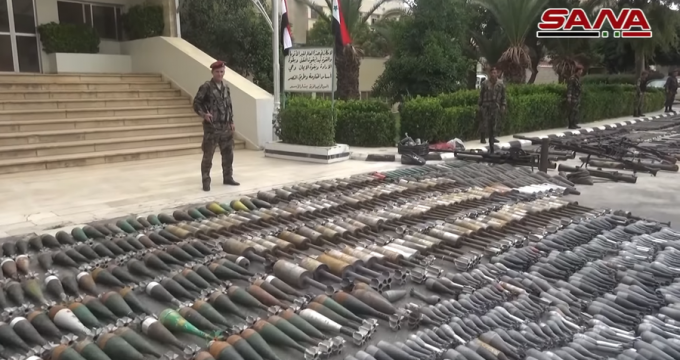 Israeli-made weapons among arms handed over by militants in Damascus

As the Syrian army is driving out the last remaining terrorists from the southern outskirts of Damascus, those who refuse to completely lay down their arms and surrender are being evacuated to rebel-controlled parts of northern Syria, mainly Idlib. As part of the deal with the Syrian authorities, militants are leaving behind medium and heavy weapons.

Ahead of the evacuation in the towns of Yelda, Babila and Beit Sahem, militants relinquished hundreds of weapons and munitions, including mortar launchers, machine guns, rocket and mortar shells, gunpowder, precursors for home-made explosives, as well as Israeli-made landmines, SANA, which posted a video of the armaments, reported.

This is far from the first report of Israeli-made weapons being stockpiled by militants. In February, it was reported that the Syrian army stumbled onto warehouses that were stacked with weapons, some of which were Israeli-made, as they were inspecting the Al Boukamal and Al Mayadin areas in Deir ez-Zor, which was liberated by the Syrian forces from Islamic State (IS, formerly ISIS/ISIL) in the fall of last year.

Since the onset of hostilities in Syria, the Syrian military has repeatedly seized armaments and munitions with inscriptions in Hebrew. In April 2016, Syrian forces pulled over a vehicle packed with Israeli-made mines, mortars, rockets and hand grenades that were bound for an area controlled by ISIS in eastern Syria.

Israel says it provides humanitarian assistance to Syrian anti-government forces, but it remains largely silent on the apparent weapon supplies. Meanwhile, Haaretz reported in February that at least seven Sunni rebel groups in the Israeli-occupied Golan Heights are being provided weapons and ammunition from Israel. Moreover, the amount of direct military assistance they receive is said to have been on the rise in the recent months.

Syria has previously accused Israel of waging a proxy war through its allied militias, with Syrian President Bashar Assad saying the Israeli authorities were siding with terrorists “whether logistically, or through direct raids on our army.”

This comes at the time of ramped up tensions between the two countries and just a few days after Israel launched a barrage of rockets at what it claimed were Iranian targets in Syria in retaliation for an alleged attack by Iran’s Quds Forces against Israeli positions in the Golan Heights. Three people were killed and two were injured in the bombardment, which was condemned by Iran as a flagrant violation of Syria’s sovereignty.