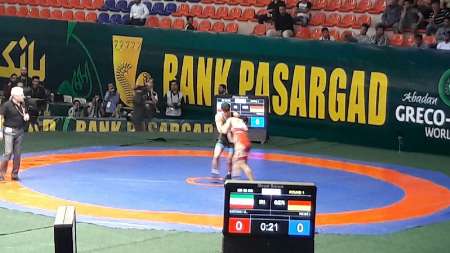 MNA – The Iranian Junior Greco-Roman wrestlers have claimed the tile of 2018 Cadet Asian Championships in Uzbekistan with 4 gold medals, one silver and two bronzes.

The 2018 Cadet Asian Championships kicked off on Thursday, May 10, and wrapped up yesterday, May 11, in the capital city of Uzbekistan, Tashkent.

According to ‘United World Wrestling’ website, Iran kicked off the first day of competition at the 2018 Cadet Asian Championships by winning three of the seven possible Greco-Roman gold medals.

Iran’s first gold medal was obtained by Amirreza Dehbozorgi at the 45kg.

Another Iran’s representative, Sajjad Abbaspourragani defeated a Kazakh wrester at the 48kg to claim the second gold medal for Iran.

Also, Mohammad Nosrati gave Iran’ team their third gold medal of the night after shutting out Kumar Nitesh from India 6-0 in the 92kg finals.

Finally, Mohammd Naghoosi at 80kg grabbed the fourth gold medal for Iran by winning against a South Korean wrestler.