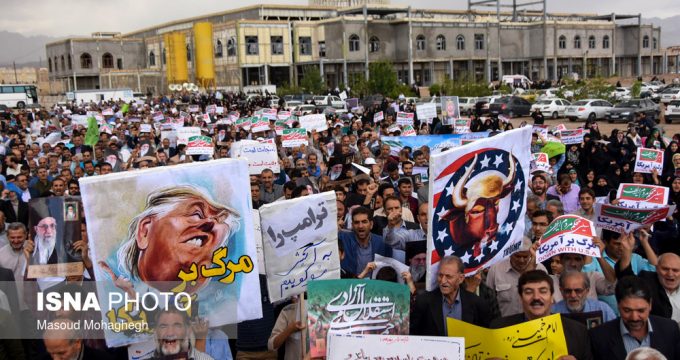 America’s message to Iran: Only nukes can save you

The Islamic Republic is hemmed in by hostile neighbors clamoring for America to invade. One of those neighbors – itself a nuclear weapons state – has been demonstrating the impunity conferred by such weapons by bombarding Iran’s foreign bases, killing dozens.

The Iranian president, a moderate who gambled his legacy on a deal with America, has been exposed as a fool and an impotent, lacking the tools to pursue the country’s national interests, bolster its economy, or even mount symbolic retaliation for the slaughter of his soldiers.

Hardliners in Iran point to the nuclear agreement, cast aside by American treachery they had predicted all along, as the root cause of this humiliation. They are braying for a reboot.

Iran’s strategic mistake, they argue, was negotiating before it had nuclear weapons.

Tehran should have followed the successful strategy of North Korea, by negotiating after it had perfected bombs and delivery systems.

There is no question that Iran abided by the commitments it made in 2015.

It opened its nuclear sites to inspection, destroyed most of its centrifuges, handed its uranium stocks to Russia, and even poured concrete into the reactor core that might have given it weapons-grade plutonium.

These were the actions of chumps, Iran’s hardliners now say. Three years after Iran bulldozed its own nuclear infrastructure – destroying its main source of strategic power – America changed its mind.

Iran now lacks minimal leverage to prevent another clampdown on its foreign trade. It won’t even be free to export oil, the lifeline of its national budget.

For Tehran, the fruit of political compromise is impotence, probably followed by inflation and exodus.

Meanwhile, the American leadership has taken to fawning over the North Korean leader, the risk-taking young man who spent his first years in office testing nuclear bombs and missiles. He is now “honorable.”

Until Iran can match North Korea’s feat, it will never be capable of deterring attacks on its troops overseas or on the Iranian homeland.

Achieving respect requires pain. Iran’s hardliners now argue that the bomb is the only “rational option.” This means restarting the Iranian nuclear weapons program, this time shielded deep underground and protected from bunker-busting bombs and missiles—all but nuclear weapons themselves.

Bomb in hand, Iran can negotiate from a position of strength.

All this means that the risk of war, possibly involving a nuclear attack down the road, just went up.

Saudi Arabia just confirmed that it is standing by to join the Middle East nuclear arms race. Israel may have blundered away its regional nuclear monopoly.

Unfortunately, America’s men and women in uniform may face another generational quagmire in a faraway land that sits directly between the last two wars they fought. America’s European allies, which cautioned against tearing up the nuclear agreement, are unlikely to assist.

The question now becomes, can America and Israel force the collapse of the Iranian government before it can obtain a nuclear weapon?

For, as Iran will attempt to demonstrate, treachery has consequences. For North Korea, the lesson could not have been better timed.