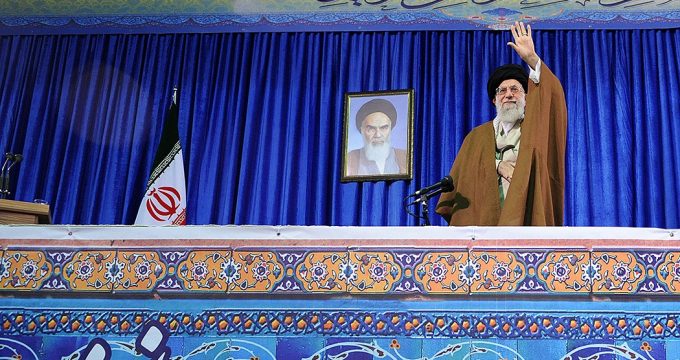 Without definite guarantee of 3 EU countries, we won’t stick with JCPOA

khamenei.ir- Celebrating National Teachers’ Week, honoring professors and teachers, Ayatollah Khamenei—the Leader of the Islamic Revolution—visited Farhangian University to meet with and deliver a speech to officials from the Ministry of Education and staff members of Farhangian University; he also engaged in two separate meetings with teachers, staff members, and students this morning, Wednesday, May 9, 2018.

Meeting with teachers, on the event of Teachers’ week, this morning (Wednesday), Ayatollah Khamenei stated: “Last night, you heard the US president make some shallow and lewd remarks. There were several lies within his speech. He threatened the Iranian government and people. I answer him, as a representative of the Iranian population: “Donald Trump, you cannot lift one finger against us.”

You know that the nuclear issue was just an excuse!” He further reminded his audience: “When the nuclear matter began, some Iranian officials said, ‘Why do we insist on keeping nuclear energy program? We can put it aside.” their reaction was not appropriate because our country needs nuclear energy, and based on the experts’ studies, within a few years, Iran will need 20,000 Megawatts of Nuclear-generated electrical power.”

The Leader went on to say, “From that day, I said that the problem the U.S. has with Iran is irrelevant to its nuclear energy; it is only a pretext. They [some officials] said this was not true.”

Ayatollah Khamenei confirmed that he was right all along on his concerns regarding the JCPOA, stating: “Now you can see for yourselves that my prediction is now a reality. We agreed on the nuclear agreement [the JCPOA]; but the animosities against Iran did not cease.”
Ayatollah Khamenei stressed: “Today, their [USA’s] concerns are about our presence in our own region and our missile program; even if we agree to their terms, conflicts will not be resolved; they will start up with another issue.”
The Leader of the Revolution stressed: “The real reason behind the opposition of the U.S. towards the Islamic Republic’s system is the fact that [before the revolution], the U.S. had complete dominance over our country, eventually, their hands were severed from Iran by the Islamic Revolution.”

Ayatollah Khamenei addressed his audience, saying: “U.S. officials want the kind of rulers, in other countries, who dish out money to them and comply with their orders. The US government wants the ability to change them, any time they need to: like how they removed Reza Khan from power and appointed his son, for instance; or, like what they get away with doing in some Persian Gulf countries, treating leaders like submissive slaves of the US.”

Further, the Leader of the Revolution stated: “A few days ago, Trump wrote a letter to the leaders of some Persian Gulf countries, to which we have access. In the letter, he indicated that he spent $7 trillion on these countries, so they must adhere to his orders. Well, Trump, you have spent all this money to dominate Syria and Iraq, but you couldn’t do it; you will go to hell with your failures.”

Referring to the dominance of the US over some Arab countries, he went on to say: “Trump gives orders, asserting ‘they must’ do as he says: he also wants to give similar orders to Iranians. The Iranian nation is independent and dignified. The previous rulers of our country deprived the people from dignity. Now the Islamic Republic and Islamic revolution have arrived, and they [The USA] cannot tolerate it’s stronghold.”

Ayatollah Khamenei continued: “Some of our own officials have said, ‘Why do we insist on opposing the US?’ May God pardon their mistake.”

The Leader continued: “What happened is a foul play on the part of the United States, and it does not surprise us. This attitude also occurred while the USA was under the rule of previous presidents, and it has happened in one way or the other during every presidency.”

The Leader of the Revolution asserted: “From day one, I said several times that the United States is not to be trusted. I said it publicly and privately. I said if you want to sign an agreement, first make sure that necessary guarantees are made. One of the conditions I mentioned was that the president of the United States has to sign it. Those in charge of the negotiations tried hard, but couldn’t satisfy this condition.”

Speaking further in the JCPOA added: “We have implemented this agreement for the past 2.5 years, and now this brute says I don’t accept it.”

Regarding the follow up to the JCPOA with or without the US Ayatollah Khamenei stated: “It is said that we are going to follow through with the three other European countries. I don’t trust these countries either. Do not trust them. If you want to agree on anything, make sure there are practical guarantees in place. Otherwise, they will do what the US did to us.”

Regarding the conditions for continuing to implement the JCPOA with Europe, the leader of the revolution reminded the officials:”if you can get guarantees, fine, although I doubt it. If not we cannot stay in the JCPOA agreement.”

He added:”the officials are facing a big test: are they going to ensure that the nation’s pride will be protected or not? The pride and interests of the nation must be truly secured.”

#IranDeal, Ayatollah seyyed Ali Khamenei, US withdrawal from JCPOA May 11, 2018
If US sense pressure working on Iran, they will double down on it: Former Diplomat
After Trump’s Iran decision: Time for Europe to step up