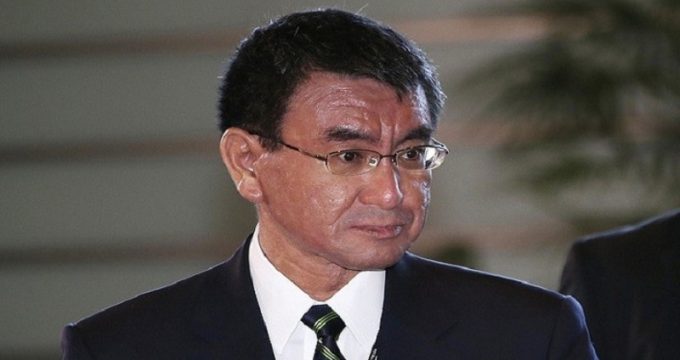 IRNA – Japan is unhappy with the fact that the US pulled out of Iran deal and will continue with its close cooperation with other countries to guard the deal, Japanese Foreign Minister Taro Kono said on Wednesday.

Japan will closely monitor the impact of the US President Donald Trump’s decision to withdraw from an international nuclear deal with Iran, Kono said.

He added in the statement that Japan will continue close talks with related nations toward maintaining the deal.

US President Donald Trump announced on Tuesday that Washington would pull out of Iran nuclear deal and reinstate nuclear sanctions on Iran.

Minutes after US withdrawal from Iran nuclear deal, President Hassan Rouhani said from now on, the deal is an agreement between Iran and five countries.

‘I have also ordered Atomic Energy Organization of Iran (AEOI) to go ahead with adequate preparations to resume enrichment at the industrial level without any limit,’ President Rouhani said in a televised speech on Tuesday evening after the US withdrawal from the nuclear deal.

He said that Iran will wait for a few weeks to consult the European sides of the nuclear agreement as well as Russia and China.

‘Everything depends on our national interests,’ the president said, noting that if Iran’s interests in the Joint Comprehensive Plan of Action (JCPOA) are guaranteed without the US presence, Iran will stay in the deal.

President Rouhani described the US presence in JCPOA a nuisance and noted that Washington was not committed to its obligations from the beginning.

The president said that Washington aims to pressure Iran with psychological and economic war but it will fail to do so.

He said that the US measure to withdraw the JCPOA will unite the Iranian nation and will promote their commitment.

President Rouhani said that his government has taken required measures and the US decision will not cause major problems for Iranian economy.