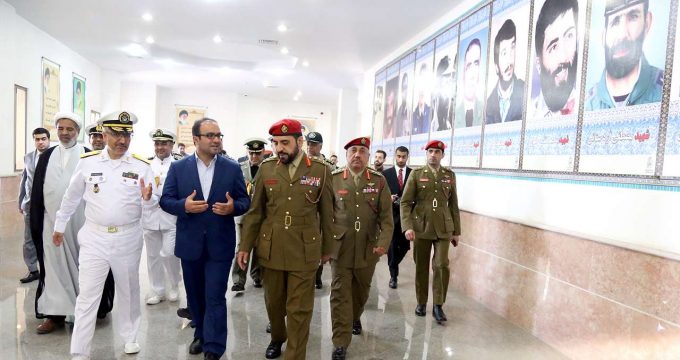 May 8, The Iran Project – This week, the Omani military delegation headed by Brigadier General al-Bloushi arrived in Tehran to hold talks with several high-ranking Iranian officials.

During a meeting with al-Balushi, Commander Rezaei stated that Persian Gulf and Oman Sea should be administrated by interactions of regional governments.

General Rezaei said some countries by drug trafficking and some other by offenses are trying to disrupt regional security and Iran is trying to increase interactions between regional states to create more security.

He added that during his visit to Qatar last month and holding talks with prime minister of Qatar, the two sides reached agreement, including holding a trilateral meeting between Iran, Qatar and Oman in a near future.

In the meeting with top Omani official, the Iranian defense minister said that Iran-Oman relations can serve as a model for other countries in the region.

Noting that collective security can bring security and mutual trust between the countries in the region, Commander Hatami underlined that Iran’s message to its neighborhood is friendship and peace.

Brigadier General al-Balushi, for his part hailed the historic relations between the two countries, stressing that Sultanate of Oman highly appreciates its relations with the Islamic Republic of Iran.

He further emphasized expansion of military relations between the two sides within the framework of joint military commission.

Meanwhile, during the first round of the joint commission’s meeting, Iran and Oman reviewed the progress of agreements and transactions between the two sides, and discussed plans for further development of military ties and international police cooperation between the armed forces of the two countries.

Addressing the meeting, General Nezami said while political and military relations between the two countries of Iran and Oman are on the right track due to the wise positions of the leaders of the two countries, unfortunately, the political, military and security situation of the region and the Islamic world is becoming a matter of concern.

Al-Bloushi, in turn, called on the Muslim world to solve their disputes through dialogue.

Speaking to reporters on the sidelines of the meeting, General Nezami said Iran-Oman joint military commission shows the two countries’ resolve to establish peace and stability across the region and the world.

“The joint military commission between Iran and Oman is one of the most stable commissions in the region that has tremendously helped the expansion of relations between the two sides,” he said.

On the other side, some Iranian companies are participating in three Omani international exhibitions which opened simultaneously in Muscat on Monday (May 7).

According to Iran’s Embassy in Muscat, 20 Iranian companies involved in producing dried fruits, foodstuff, processing industries, livestock drugs and pastries are presenting their products in the Exhibition of Agricultural Products and Halal Foodstuff.