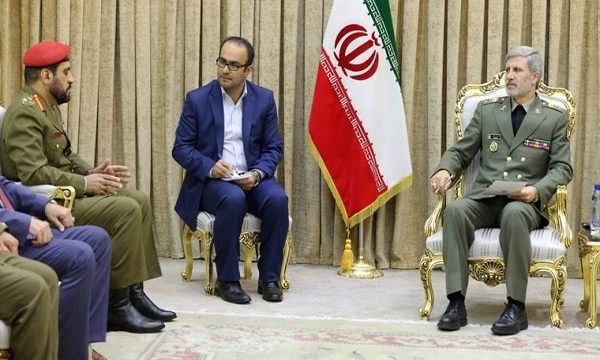 MNA– Iran’s Defense Minister Brigadier General Amir Hatami met with an Omani military delegation during which he expressed Iran’s readiness to create a positive, constructive atmosphere in the region.

According to Public Relations Department of Iran’s Defense Ministry, Brigadier General Hatami met and talked with a military delegation from Oman headed by Brigadier General al-Balushi, the Deputy Chief of General Staff of Oman’s Royal Forces, on Tuesday.

In the meeting, the Iranian defense minister expressed his happiness with the 14th joint commission meeting hosted by General Staff of Iranian Armed Forces in Tehran on Saturday May 5, stressing that such meetings will strengthen bilateral ties, which in turn can help security and peace in the region.

Bregadier General Hatami added that Iran-Oman relations can serve as a model for other countries in the region.

Noting that collective security can bring security and mutual trust between the countries in the region, the Iranian defense minister underlined that Iran’s message to its neighborhood is friendship and peace.

Brigadier General al-Balushi, for his part hailed the historic relations between the two countries, stressing that Sultanate of Oman highly appreciates its relations with the Islamic Republic of Iran.

He further emphasized expansion of military relations between the two sides within the framework of joint military commission.