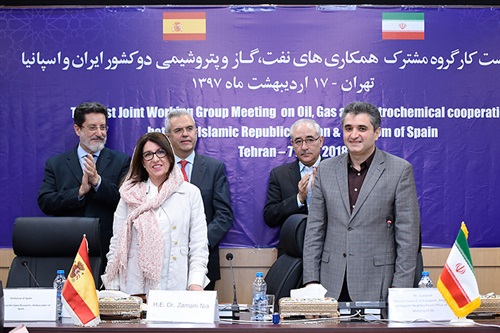 SHANA– The international department of the Iranian Ministry of Petroleum signed a memorandum of understanding with the representative board of Spanish firms in Tehran with the aim of enhancing oil and gas relations.

The deal was signed on the sidelines of the 23rd Iran oil and gas show on Monday between Hossein Esmaeili Shahmirzadi, director general of the Europe, US and Caspian neighbors department of the ministry, and Mercedes Monedero, head of the Spanish working group.

The MoU is aimed at encouraging firms to join upstream and downstream projects, provision of equipment and transfer of technologies to Iran as well as IOR and EOR cooperation.

Addressing the joint working group meeting of oil, gas and petrochemical cooperation between Iran and Spain, Hossein Zamani-nia, deputy petroleum minister for international affairs and trading, said “The presence of the Spanish in Iran so seriously indicates that they are still willing to cooperate with Iran in light of the Iran conditions.”

“We don’t think there would be any problem for the continuation of cooperation with Spanish and other European companies,” he said during an Iran-Spain Forum at the Iran Oil and Gas Show in Tehran.

He said that memorandums were signed between Iranian and Spanish firms for cooperation in upstream and downstream sectors, supply of equipment, enhanced oil recovery (EOR) and improved oil recovery (IOR).

“We have notified the Spanish party of grounds for cooperation with Iran in manufacturing and supplying equipment,” said Zamani-Nia.

“The Spanish companies have negotiated with several companies for financing Iranian projects. They have tried to select companies well aware of conditions for cooperation and our challenges,” he said.

The next Iran-Spain forum is scheduled to be held in July 2019 in Spain.