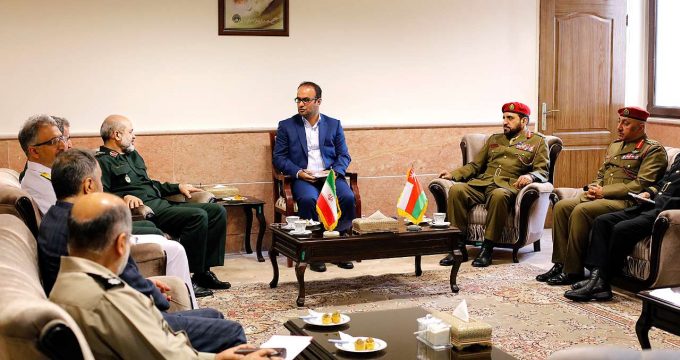 Vahidi made the remarks on the sidelines of a meeting with Brigadier Hamad bin Rashid al Balushi, Assistant SAF Chief of Staff for Operations and Planning of Oman.

Oman has taken a logical policy which can be a good pattern for maintaining peace in the region.

The military relations between two countries are constructive, he said, adding that educational programs and joint military drills are also being held which help reinforce bilateral relations.

Vahidi also referred to negotiations in research and scientific fields.

He expressed hope for implementation of the agreements.

Commenting on the joint maritime drills held jointly by Iran and Oman, he said, ‘Iran’s geopolitical status is of importance and cooperation between the two countries to safeguard Strait of Hormuz is vital and strategic.

Elaborating on the drills’ message for the Persian Gulf Littoral States and the region, Vahidi said Iran’s stances regarding regional issues are clear.

‘We observe cooperation among terrorists, the Zionist regime of Israel and Saudi Arabia in killing Muslims,’ he added.

The US-Saudi backed terrorists in Syria are killing people and so does the Zionist regime in Palestine, Iranian commander said.

This is while; Iran and Oman are holding joint military drills to teach them how to cooperate to bring back peace and security to the region.

Rashid al Balushi is in Tehran to attend Iran-Oman 14th Joint Military-defensive cooperation committee which has kicked off in Tehran.