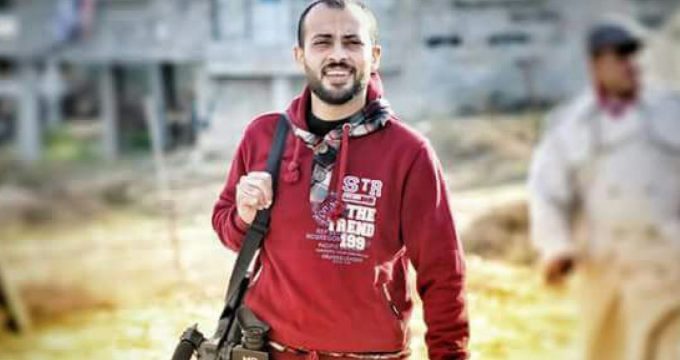 US rebukes journalist killings except ones by Israeli regime

Alwaght – US State Department failed to condemn the Israeli regime’s killing of Palestinian Journalists who were covering Palestinians protests along Gaza Border with Occupied Palestinian territories.

Spokesperson of US Department of State Heather Nauert, Speaking on World Press Freedom Day, preached freedom from oppression for all journalists – unless they are Palestinian and the oppressor is Israeli regime, Russia Today reported.

Israeli regime has been cracking down on Palestinian protesters along the border in Gaza since March 30, killing at least 45 people – two of them journalists’ – and injuring over 7,000 others, according to the Gaza Health Ministry.

Nauert started her Thursday briefing by praising the State Department press pool and urging accountability for the “apparent assassination” of a BBC journalist in Afghanistan on Monday (one of the nine that were killed in that attack). She then profusely condemned the many violations of journalists’ rights across the world. Among the perpetrators, she listed Myanmar, Egypt, Turkey, Tanzania, Cambodia, the Philippines, Malta, Mexico and, of course, China and Russia. All of them were chastised as oppressive governments that repress, detain or outright murder unwanted journalists.

Once Nauert was done with her opening speech (which included congratulating one of the journalists present on her promotion and praising another’s dress choice), she moved on to other topics – but was pulled back on track by the first reporter to ask a question:

“Would you also condemn the recent deaths of journalists, Palestinian journalists in the Gaza Strip?”

Nauert answered that too many journalists die across the world, and the State Department can’t mention them all.

She said that the US, of course, is “always saddened by the loss of life,” but “Israel has a right to defend itself.”

When pressured further, Nauert claimed no detailed knowledge of any journalists killed or injured by Israeli forces, and ultimately told the pool reporters to go ask the Israeli regime.

Journalist Abdul-Rahman al-Khatib intensely suffocated from teargas inhalation, and journalist Sulaiman Abu Zarifa was hit and injured by a teargas canister in his foot, while journalist Hamza Shami was hit by a canister in his shoulder, WAFA reported.

The 46-day Great March of Return protests started on March 30 and are set to reach their climax on May 15, in which over 750,000 Palestinians – now estimated to number nearly five million with their descendants- were forcibly displaced from their homes to make way for the creation of Israeli regime in 1948. Since then, the occupying Israeli regime has denied Palestinian refugees the right to return, despite UN resolutions and international law that upholds people’s right to return to their homelands.

These year’s Land Day demonstrations come at a time when Palestinian anger is already high over Trump’s decision in December 2017 to recognize al-Quds (Jerusalem) as Israeli regime capital.

#FreePalestine, Ahmed Abu Hussein, Gaza Strip, Israel, US May 6, 2018
It is not up to Israel to determine Iran’s JCPOA compliance: Kimball
Photos: Supreme Leader receives families of martyred police forces