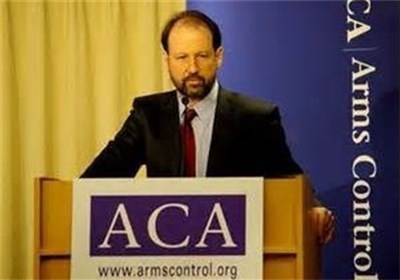 It is not up to Israel to determine Iran’s JCPOA compliance: Kimball

MNA – “It is not up to Netanyahu, the leader of a nuclear-armed state outside of the NPT, to determine whether Iran is currently violating its nuclear nonproliferation commitments, but its up to the IAEA and the JCPOA Joint Commission.,” Kimball tells Mehr News in an exclusive interview.

Do the documents released by Israeli Prime Minister Netanyahu include any new details about Iran’s nuclear deal? As you know, Olli Heinonen the ex-Deputy Director General of the IAEA provided these documents to the Board of Governors in a confidential session back in 2008. So, the recent information couldn’t have provided anything new.

On April 30, Prime Minister Benjamin Netanyahu of Israel — which has its own unacknowledged nuclear weapons arsenal — laid out detailed documentation that he said provides evidence of Iran’s pre-2003 nuclear weapons design efforts.

Concerns about Iran’s nuclear weapons potential are not new. For more than a decade, the expert community, Western governments, and the IAEA have understood that Iranian scientists and technicians had conducted experiments with potential military dimensions – activities related to nuclear weapons design and development – prior to 2004.

In 2007, the United States released an unclassified summary of an updated National Intelligence Estimate on Iran’s nuclear program. It assessed “with high confidence” that Iran halted its nuclear weapons design and weaponization work and clandestine uranium conversion and enrichment in the fall of 2003. Additionally, it assessed with “moderate confidence” that the weapons program had not resumed as of mid-2007.

On November 8, 2011, the IAEA released a report detailing a range of activities related to nuclear weapons development, most of which occurred before 2004. It raised concerns that some weapons-related activities occurred after 2003. The information in the report was based primarily on information received from other countries, likely including Israel, but also included information from the agency’s own investigation.

Even if the documents assembled by Israel are genuine, they do not appear to reveal that prohibited nuclear weapons research and design activities continued in an organized fashion beyond 2003.

Instead, it is essential to ensure that Iran is no longer engaged in nuclear weapons research and design activities, that there is robust monitoring of Iran’s ongoing nuclear activities, and that Iran’s nuclear program is constrained in ways that prevent it from being able to quickly amass enough weapon-grade material for even one nuclear bomb.

One step in this multi-pronged strategy has already been undertaken. The IAEA conducted a detailed investigation into Iran’s activities with potential military dimensions beginning in 2013. Under the Joint Framework for Cooperation, Tehran agreed to take several steps to address IAEA concerns, including providing information and access to research reactors and production plants.

The 2013 Framework for Cooperation was superseded by the 2015 Roadmap for the Clarification of Past and Present Outstanding Issues regarding Iran’s Nuclear Program. The roadmap required Tehran to provide information on all the concerns the IAEA had identified in the 2011 report. Sanctions relief in the nuclear deal was contingent upon Iranian cooperation with the agency’s investigation.

The IAEA’s completed assessment, released on December 2, 2015, concluded that Iran had pursued an organized nuclear weapons research program prior to 2003, including a coordinated “range of activities relevant to the development of a nuclear explosive device.” Some activities continued through 2009, according to the report. But they “did not advance beyond feasibility and scientific studies, and the acquisition of certain relevant technical competences and capabilities.” The agency found “no credible indications” that nuclear material was diverted to the weapons program or that any undeclared activities had taken place since 2009.

Following a meeting on December 15, 2015, the 35-member IAEA Board of Governors voted unanimously to close the investigation into Iran’s past weaponization work while continuing to report on Iran’s implementation of the JCPOA.

According to IAEA inspection team, the so-called Amad plan was stopped abruptly by Tehran in late 2003. So, why does Netanyahu revive a scenario already rejected by IAEA?

Netanyahu’s presentation is clearly designed to raise fresh concerns about Iran’s future nuclear weapons ambitions and to build a case for scrapping the JCPOA — even though all parties, including the US government, have agreed that Iran has met its commitments. His briefing was, however, a stark reminder of the JCPOA’s value.

By revealing pubicly details that the IAEA has been aware of for many years, Netanyahu may also be seeking to create a pretext for special IAEA inspections of sites in Iran that may have been involved in certain sensitive research experiments. It will be up to the IAEA to determine whether this information is credible or new and whether there are questions or sites that require further examiniation to ensure that Iran continues to meet its NPT and its JCPOA commitments.

As the White House assessed the newly released documents were authentic, shall we think of Netanyahu’s claims as a prelude to Trump’s withdrawal from JCPOA?

How Netanyahu’s presentation affects decision in Washington is not clear. If anything, it should serve as a reminder to those concerned about Iran’s future capability to build nuclear weapons of how important it is for all parties to fully implement the JCPOA.

Netanyahu claims that Iran isn’t complying with nuclear deal. Now the question is which one has the right to assess Iran’s compliance or violation, Israel or IAEA?

Presently, Iran is meeting all of its JCPOA commitments. The IAEA has reported Iran’s compliance with the accord in 10 consecutive reports. US Secretary of State Mike Pompeo, testified to Congress last month that there is no evidence of Iranian noncompliance with the JCPOA. It is not up to Prime Minister Netanyahu, the leader of a nuclear-armed state outside of the NPT, to determine whether Iran is currently violating its nuclear nonproliferation commitments, but its up to the IAEA and the JCPOA Joint Commission.

Given Iran’s history, it is prudent to assume that Iran has the know-how to design and build a nuclear device. This makes essential to ensure that Iran cannot amass enough fissile material necessary to build nuclear weapons and that the IAEA maintains robust monitoring and verification system to detect and deter potential violations of Iran’s solemn commitment not to pursue nuclear weapons. This is precisely why the JCPOA remains necessary.