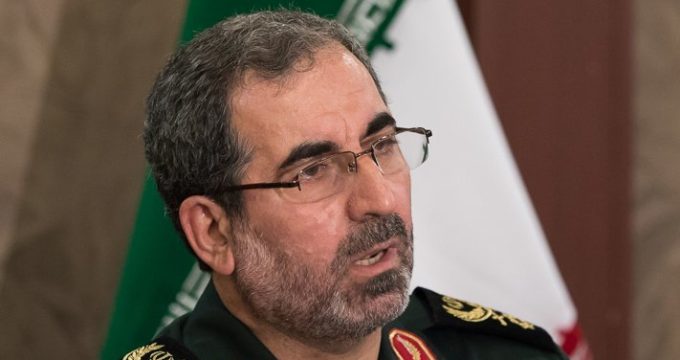 Iran to vigorously respond to any military threats

Brigadier General Ghadir Nezami, Deputy Commander of General Staff of Iranian Armed Forces for International Affairs, made the remarks in the fourth meeting of Iran-Oman joint military commission, during which he added “while political and military relations between the two countries of Iran and Oman are on the right track due to the wise positions of the leaders of the two countries, unfortunately, the political, military and security situation of the region and the Islamic world is becoming a matter of concern.”

The Iranian military official referred to the terrorist groups’ criminals acts in the region with the support of the United Stated and Saudi Arabia, pointing out that the Saudis and Zionists cooperation is the main reason behind the division in the Muslim world.

He later noted that due to Iran’s leading role in the fight against terrorism and its commitments to the international agreements as well as its independent position, it has come under immense pressures from western countries and their allies in the region, adding that Iran will vigorously respond to any threats from the enemies and it considers strengthening its defensive power as an inalienable right.

Also in the meeting, the head of Omani military delegation Brigadier General Hamad bin Said al-Bloushi, the deputy Chief of Staff of Oman’s Royal Armed Forces stressed unity among Muslim countries, calling on the Muslim world to solve their disputes through dialogue.

While in Iran, the Omani military delegation are expected to hold meeting with different Iranian military officials. Meanwhile the two countries have planned to hold  rescue and search drills in the Persian Gulf in the coming days with the participation of Iran’s Army and IRGC’s naval forces, border guarding forces of Iran and Royal Navy of Oman and finally, Oman’s Police Coast Guard.