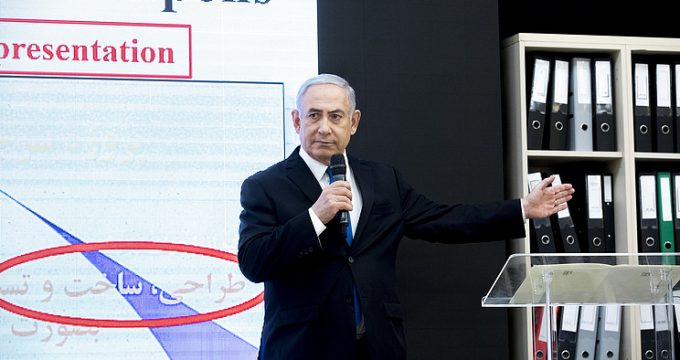 Iranian Diplomacy | Kaveh L. Afrasiabi: One day after yet another military aggression against Syria by its missile strikes against the Syrian military targets in Homs and Aleppo, the Israeli government went on the media offensive against Iran by patting itself on its own shoulder for achieving a major intelligence coup yielding a huge cache of Iran’s secret nuclear files.  As expected, the White House, which admittedly had “coordinated” with the Israeli Prime Minister on this matter, quickly branded the alleged, fully unsubstantiated evidence as “compelling” and used it as a timely hammer to knock down the Iran nuclear accord, now shifting the discourse and insisting that it was achieved through “false pretexts” and an Iranian nuclear subterfuge.

For its part, the mainstream US media has sheepishly toed the line and instead of asking tough questions, such as how in the world is it possible to steal half a ton of secret files from a well-guarded Iranian facility short of lapsing into a Hollywood spy universe, e.g., the PBS limited itself to an interview with the ardent pro-Israel David Albright, who parroted Netanyahu word by word and thus made a mockery of his “scientific” pretensions.  Albright’s think tank, Institute for Science and International Security, poses itself as “non-governmental” when, in fact, it is little more than an appendage for Israeli government’s soft power propaganda.

Henceforth, Trump’s difficult path to scuttling the Iran deal known as the JCPOA (Joint Comprehensive Plan of Action) has been smoothed somewhat as a direct result of Israel’s media coup that bears no connection to reality and follows the new “post-fact” pattern of Western behavior seen in the recent US-UK-France attack on Syria despite the absence of any credible information regarding a chemical attack in Eastern Ghouta.  Ironically, for someone who campaigned vigorously against “fake news,” Trump has proved quite adept at using it, both directly and indirectly, as an instrument of foreign policy against the adversaries such as Russia, Syria, and Iran.

Fortunately, Netanyahu’s latest lies on Iran have failed to be convincing to the international community, in light of the stern response by the IAEA, confirming the absence of “any credible evidence” corroborating the Israeli accusations against Iran.  The European powers, on the other hand, have seized on Netanyahu’s presentation to press the importance of the JCPOA in preventing an Iranian proliferation, which is commendable yet insufficient in light of the need for a categorical debunking of Netanyahu’s 11th hour offensive to boost Trump’s impending train wreck on the JCPOA; lest we forget, a successful JCPOA inevitably raises the issue of a nuclear weapons-free zone in the Middle East and the need to rein in on Israel’s clandestine nuclear arsenal, given Israel’s stubborn refusal to join the Non-Proliferation Treaty.  The JCPOA is a landmark development for peace in the Middle East and a milestone in terms of pacific settlement of disputes.

Netanyahu’s lietmotif, however, appears to be war-driven and part of a warmongering policy that seeks to enroll the US, despite Trump’s stated misgivings regarding US’s embroilment in yet another costly Middle East war.  Rationalized in the narrative of “preemption” like so many previous Israeli military gambits, Israel’s war plans against Iran can engulf the entire region and set back the cause of regional peace for a long time.  Given Iran’s extensive ability to strike back throughout the region, Israel should expect serious retaliation against its assets within Israel, which would imperil Israel’s economic well-being, among other things.  In other words, Netanyahu’s latest Iran hysteria is counter-productive for Israel’s own interests and, yet, he appears poised to inflict serious damages — to regional and international peace and security.