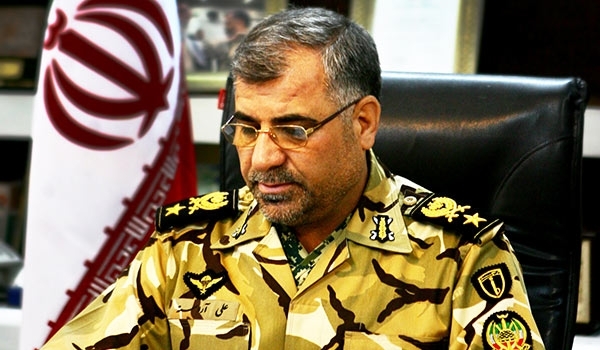 MNA – Deputy Commander of the Army Ground Forces Brigadier General Ali Arasteh said that any movement launched by enemy in Syria, Iraq and Yemen is an excuse to confront Iran.

Enemies of Islam have inflicted heavy disasters and calamities in Syria, Iraq and Yemen, he said, adding, “all these movements are an excuse to face Iran militarily.”

He made the above remarks in a ceremony held in Hidaj city of Zanjan province on the occasion of auspicious 15th of Sha’ban (making the birth anniversary of Hazrat Mahdi (May God Hasten His Reappearance) and added, “with their sacrifice, martyrs bestowed independence, majesty and sovereignty to the country.”

At the current situation, enemy of the country has resorted to various cultural and political conflicts against the country and has tried to sow seeds of discord to materialize its malicious and heinous objective, the brigadier general maintained.

In conclusion, Deputy Commander of the Army Ground Forces Brigadier General Ali Arasteh called on the noble nation of Islamic Iran especially youth and young individuals to be vigilant against conspiracies waged by enemies against this country and said, “under such circumstances, all walks of life in the country should practice unity and amity in order to foil enemies’ plots.”