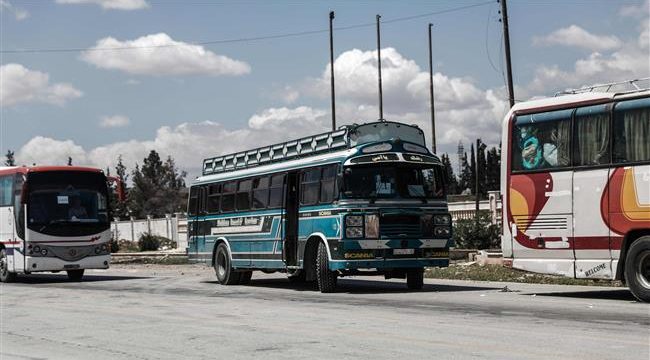 Press TV – Takfiri militants have started evacuating three districts south of the Syrian capital, Damascus, which they agreed to hand back to the government under a recent deal.

On Thursday, Syria’s official SANA news agency reported that buses had arrived in Babila, Yalda and Beit Saham, to transfer the militants and their families from the area to the militant-held regions in the country’s north.

“Around 5,000 terrorists and their families are expected to leave, fulfilling an agreement reached on Sunday between the Syrian government and terrorist groups,” the report said.

The so-called Syrian Observatory for Human Rights, which complies its reports based on anti-government sources, also reported that the deal was the outcome of negotiations between the militants, on the one side, and the Syrian government and Russia, on the other.

Since February, the Syrian army backed by Russia, has been engaged in a major military push to cleanse Damascus and the surrounding areas of terrorist groups.

In parallel with the ongoing operation, the government has sought to strike evacuation deals with the militants holed up in the suburban areas around the capital in an effort to decrease the fighting and protect the civilians caught up there.

Such deals usually allow the militants who lay down arms and accept the state rule to stay in the area with their families.

In a significant victory early last month, the Syrian army managed to fully liberate the Eastern Ghouta suburb of Damascus, which had long been controlled by militant groups and served as a launch pad for deadly rocket attacks against residents and civilian infrastructure in the capital.

Government forces then went for the districts located south of Damascus, including Yarmouk, which hosts a Palestinian refugee camp.

The camp was held by Daesh Takfiri terror group as well as militants with the so-called Hayat Tahrir al-Sham, al-Qaeda’s former affiliate in Syria.

However, those terrorists are in the middle of pulling out of Yarmouk together with their families as part of a similar withdrawal deal with the government.

Most of the recently-liberated areas are still subject to mop-up operations by Syrian army forces and sappers, who are combing every neighborhood to discover militant arms depots and get rid of the explosive devices planted by the terrorists.

On Wednesday, a mine-clearing operation saw hundreds of explosives discovered and defused in the Eastern Ghouta town of Douma, which was once controlled by the Takfiri Jaish al-Islam militants.

According to the Russian Reconciliation Center for Syria, Syrian sappers have so far detected and defused over 1,000 mines, 1.5 tonnes of explosive material and 40,000 home-made explosive devices.

It added that an arsenal left behind by militants included landmines with the markings of manufacturers of NATO member states.