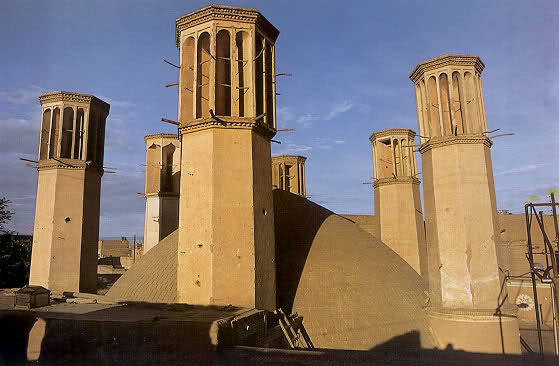 Press TV – Iranians have managed to tame the hostile conditions of arid climate and extremely warm regions for thousands of years through construction of windcatchers as a sustainable air ventilation technique and artistic representation of their ingenuity in architectural designs.

A windcatcher, windtower, or as Persians called it, badgir, is an architectural element for creation of natural air conditioning in buildings in arid and extremely warm areas.

The birthplace of the technology is still unclear, but it is believed to be initially used by ancient Egyptians. However, it was the Iranians who made the most of the versatile technology and excelled at building the world’s most famous windtowers.

Apart from arid and semi-arid areas in central and southern Iran, windcatchers can also be found in traditional Persian-influenced architecture throughout the Middle East, Pakistan and Afghanistan.

Depending on several factors such as geographical and climate conditions, architectural design, purpose of use and budgetary considerations, windcatchers are built in different shapes, including uni-directional, bi-directional, and multi-directional shapes.

The structures mainly serve as temperature regulators, which draw the cool airflow into the building and transfer warm stale air outside.

In dry areas, the incoming airflow is further cooled down by passing above a water pool, howz, or water canal, qanat, located under the badgir. The technique is particularly used in the design of public water reservoirs, Ab anbar, where several windtowers chill down the interior section of the structure even to near freezing temperature.

In warm humid areas, such as coastal regions, water pools are not used under the windtowers. Instead, the tower allows the low-density hot air to travel upwards and escape out the top and create an airflow which constantly traps the high-density cool air below inside the building.

The direction of the windcatcher depends on the speed and quality of the wind in the environment. In desert areas, where the wind is mainly hot and dusty, the open side of the tower is directed northward to prevent the flow of dust into the building and allow the cooler northern breeze to enter the structure.

The rooms located under windcatchers in residential buildings are also used as a place to preserve food stuff for longer periods.

Apart from the practical purposes of windcatchers, the structures are also used as decorative architectural elements which even represent the social status of the owner of the building.

Elaborate brickworks, tileworks and plaster artworks are used to give the windcatchers a more artistic shape.

The Iranian city of Yazd is particularly famous for its stunning skyline, beautified by countless multidirectional windcatchers decorated with myriads of artistic designs.

Every year, the UNESCO World Heritage Site, also known as the city of windcatchers, attracts hundreds of thousands of tourists who come to enjoy the charming view of the skyline and traditional urban design of Yazd.

The city is also home to the world’s tallest windtower located in the historic site of Dowlat Abad Garden. The octagonal windcatcher is 33 meters high and includes unique decorative designs in its exterior and interior.

Nowadays, the technique is once again becoming popular, with Iranian architects starting to use the design in several post-modern buildings.

The windcatcher technology has also recently been used in Western architecture, including in the visitor center at Zion National Park, Utah, the Kensington Oval cricket ground in Barbados and the Saint-Etienne Metropole’s Zenith.