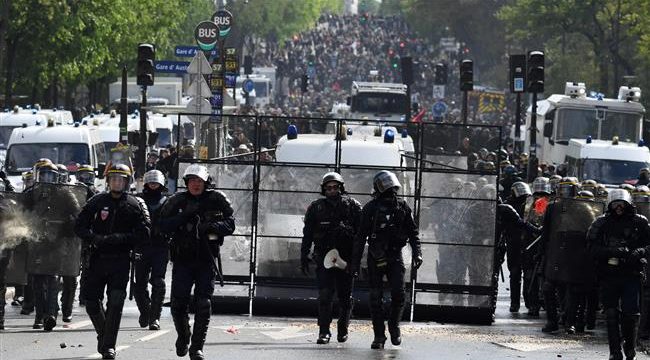 Qassemi said on Wednesday that the French police should provide security for citizens and “guarantee the professional activities of journalists and the press.”

An Iranian correspondent and a cameraman from Iran’s state television IRIB were covering the protest rally by anti-government demonstrators in Paris on Tuesday when the two were wounded as police clashed with protesters.

Shahsavar Hosseini, the IRIB correspondent in the French capital, passed out after inhaling tear gas during the demonstrations.

Ramin Tohidian, a cameraman of the Iranian TV crew, was also wounded after being hit in the head by a rubber bullet and rushed to hospital. He is reportedly in the intensive care unit due to severe brain hemorrhage.

The Foreign Ministry Spokesman (seen below) said that from the very beginning of the incident, Iran’s embassy in Paris has been seriously following up on the health condition of the IRIB team, and expressed hope that they would recover soon.

“We consider such incidents unacceptable, and expect French authorities to seriously and fully cooperate with Iran’s embassy in dealing with the perpetrators of this incident and to look into the condition of the IRIB team,” he added.

On the sidelines of the peaceful May Day rallies in Paris on Tuesday, police used water cannon and tear gas against seemingly anarchist protesters who smashed shop windows and hurled petrol bombs.

The masked protesters also interrupted rallies by labor and student union members in the French capital.

Authorities had warned on Monday that anarchist groups would attempt to incite violence during planned May Day gatherings.

President Emmanuel Macron condemned the violence in a Twitter message while on a visit to Australia.

French police say they have held 109 people and French Interior Minister Gerard Collomb has said those remanded in custody would be prosecuted.