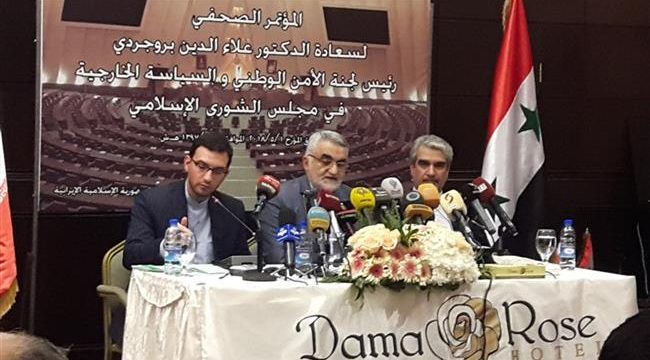 Press TV- A senior Iranian lawmaker has criticized Saudi Arabia’s foreign policy agenda, which has seen the kingdom moving towards normalization of ties with the occupying Israeli regime and launching a bloody war against neighboring Yemen.

“We deeply regret that a government like Saudi Arabia is at the forefront of countries that are normalizing ties with the Zionist regime,” Chairman of the Parliament’s Committee on National Security and Foreign Policy Alaeddin Boroujerdi said at a press conference in the Syrian capital, Damascus, on Tuesday.

Israel and Saudi Arabia have no diplomatic relations, but they are widely believed to have secret liaisons. Latest reports suggest the two regimes are working behind the scenes to establish formal contact.

Boroujerdi further referred to the Saudi war on the Yemeni nation, saying more than 15,000 Yemenis have been killed since the onset of the Riyadh-led military operation in March 2015.

The Iranian parliamentarian highlighted the Saudi regime’s failure to achieve the goal of its military campaign in Yemen, which is to crush the country’s popular Houthi Ansarullah power and reinstall a former Riyadh-friendly government.

Riyadh had said it would end the war in three months but used all types of US, UK and French weapons against Yemeni people, said Boroujerdi. “However, three years on, Saudi Arabia has achieved nothing and faced defeat in its own war.”

Responding to a question about the latest Israeli threats against Tehran, Boroujerdi stressed, “We will react to any aggression against the Islamic Republic of Iran at the right time.”

He further commented on a new televised show by Israeli Prime Minister Benjamin Netanyahu, during which he presented what he called documents on Iran’s “secret” nuclear work, saying that the premier has been repeating the same “lies” to deceive world leaders and public opinion.

This occupying regime is threatening global peace with its nuclear bombs, he noted, urging the International Atomic Energy Agency to launch an investigation into the regime’s nuclear arsenal.

“We call on all regional countries to put pressure on Israel for nuclear disarmament,” he added.

The Iranian lawmaker also said that Iran welcomes any efforts to find a political solution to the Syria conflict.

Boroujerdi’s news briefing came at the end of his two-day visit to Syria, where he met with President Bashar al-Assad.