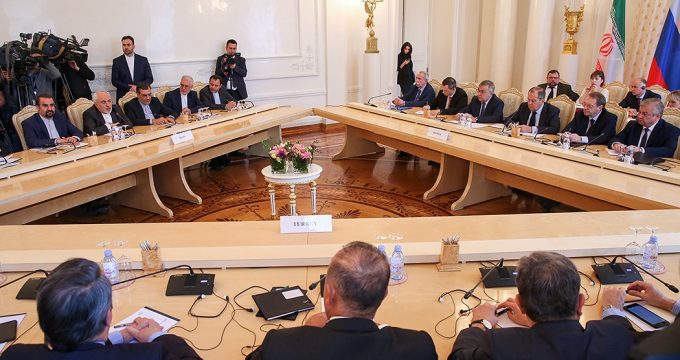 Iranian Diplomacy | Mohammad Ghaderi: On Saturday, Iranian Foreign Minister Mohammad Javad Zarif traveled to Moscow for a one-day visit to meet with foreign ministers of Turkey and Russia on the current situation in Syria.

Zarif arrived in Moscow at 10 am local time. Zarif’s work program began at 10:30 in the Russian Foreign Ministry’s villa. He attended a bilateral meeting with his Turkish counterpart, Mevlut Cavusoglu. At the meeting, which lasted for about 50 minutes, the parties discussed important regional issues.

Zarif then attended a meeting with his host, Sergei Lavrov. During the meeting, the sides discussed issues such as the JCPOA and the latest developments in Syria.

Subsequently, Zarif, Lavrov and Cavusoglu, discussed the latest developments in Syria in a tripartite meeting.

The talks were held as the recent attacks by the United States, France and Britain on Syria had cast shadow over the meeting.

In a statement issued at the end of the meeting the sides “underscored the efficiency of the Astana format as the only international initiative that had helped practically improve the situation in Syria through joint efforts to combat terrorism, reduce the level of violence and create favorable conditions for the political settlement, including via facilitating broad intra-Syrian dialogue.”

The U.S., Britain and France fired 100 missiles at Syria for alleged use of chemical weapons at Douma, a city near Damascus. The attacks took place despite the fact that independent experts had not verified claims of chemical attack.

The violation of the Syrian sovereignty showed that the United States is still seeking to exacerbate security crisis in Syria and prevent peace and stability in the country.

Recently, 15 of the eye-witnesses of the alleged chemical attack in Douma traveled to The Hague and there they told reporters that the White Helmets video used as a pretext for the U.S.-led strike on Syria.  These individuals, including hospital staff and civilians, attended a meeting with ambassadors and diplomats of the member countries of the Organization for the Prohibition of Chemical Weapons.

The witnesses at the meeting emphasized that claims of chemical weapons in Douma were baseless.

In spite of Western propaganda against Russia and Syria, many diplomats from the Organization for the Prohibition of Chemical Weapons and the Executive Council of the Organization participated in the meeting.

Participating countries in the meeting, including Iran, have called for a legal investigation into the allegations of chemical weapons use, and linking it to the Syrian government. It was also emphasized that the allegations should be discussed at the UN Security Council.

On the other hand, it was obvious that the main objective of Washington and its European allies of these claims was to strengthen the positions of the terrorist and Takfiri groups. Over the last year, and especially after the destruction of the ISIL caliphate in Syria, the government of Donald Trump has been heavily seeking to strengthen other terrorist groups in Syria. The president of the United States intends to maintain the security crisis in any way possible. Washington, along with other players such as the Zionist regime, France, Britain and Saudi Arabia, had to accept heavy defeats in Syria in recent years. The fact is that the White House’s support for the terrorist and Takfirist groups in Syria had no result but failure for the United States and its allies.

Saturday’s meeting on Syria was held while Turkey (a member of the Moscow meeting) welcomed the U.S. attack on Syria. What is certain is that Turkey is one of the failed players in Syria.

However, Tehran and Moscow have made serious attempts in recent years to support the Syrian legal government and confront the terrorist and Takfiri groups in the country.

Countries like Turkey have also sought to strengthen the Takfiri and terrorist groups in Syria, although today some of those policies have been moderated. However, this short meeting in Moscow (which ended at 3 pm) was an opportunity for Iran and Russia to declare their positions on defending people and the government of Syria once again, and to condemn the U.S., France and Britain’s invasion of Syria.

The foreign ministers of the three countries met on March 15 last year in Kazakhstan’s capital Astana over the same issue. The three ministers also accompanied their presidents at the Ankara summit on April 4. The foreign ministers of Iran, Russia and Turkey had previously had tripartite negotiations on Syria. Zarif, Cavusoglu and Lavrov met in Moscow on December 21, 2016. They also met in Antalya on November 19, 2017. As the informed sources told Tehran Times correspondent in Moscow, the joint meetings of Iranian, Russian and Turkish officials on the situation in Syria will continue in the weeks and months ahead.