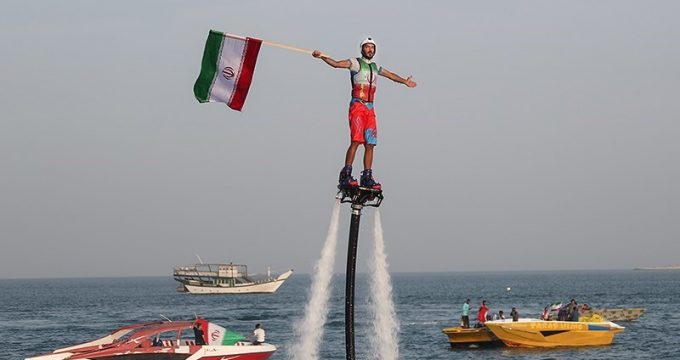 May 1, The Iranian Project – Iranians marked the National Persian Gulf Day to highlight the fact that the waterway has been referred to by historians and ancient texts as “Persian” since the Achaemenid Empire was established in what is now modern day Iran.

The National Persian Gulf Day is a very important day for the Iranian people and it is celebrated annually on April 30. It has taken place every year since 2004.

It is marked with various ceremonies in Iran, especially in the coastal cities of the Persian Gulf such as Kish island and Bandar Abbas.

In a message, Larijani said Iran’s courageous people will protect the Persian Gulf to death, adding that the boundless borders of Iran are indication of power and safeguarding and preserving borders are among the most important responsibilities of all people.

To unveil an illustrated book of Persian Gulf’s history in Tehran, Velayati said that the dream to change the name of the Persian Gulf will never get materialized.

“Whatever we do to protect Persian Gulf’s name is not enough,” noted Velayati.

“However, I have to say that this seditious change of name by a specific group is something temporary and finally the truth will be known to everybody,” asserted the head of the Strategic Research Center of Iran’s Expediency Council.

In the closing ceremony for the 8th Persian Gulf Cultural-Art Festival in Bandar Abbas, Culture Minister Salehi stated that the name of the Persian Gulf has been born with the name of Iran throughout history.

Salehi reiteratede that various historians like Assyrian, Babylonians and Romans to Arab and Islamic historians have always named it ‘Persian Gulf’.

In a meantime, Brigadier General Salami referred to the new US secretary of state Mike Pompeo’s visit to Saudi Arabia and the West Asia region, stressing that”the strategy that the United State is pursuing in the West Asia and the Persian Gulf region is creating a security dilemma and balance of power.”

He explained that the Unites States seeks to continue its domination over the Arab states which requires constant presence in the Persian Gulf states and West Asia region, adding that in that “security dilemma,” Iran is considered a threat and a sponsor of terrorism, while the world knows that Iran is at the forefront of the fight against terrorism.