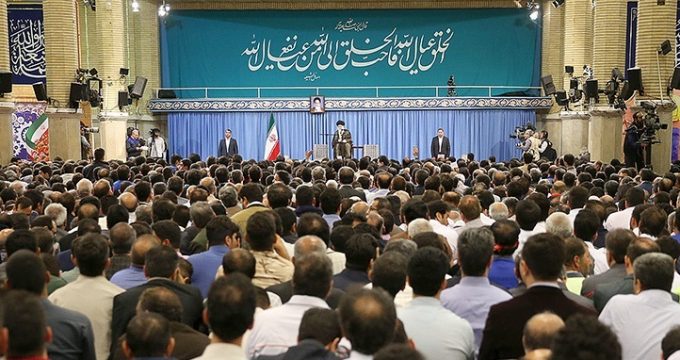 Iran Leader: US feet must be cut off from West Asia

IRNA – Supreme Leader of the Islamic Revolution Ayatollah Seyyed Ali Khamenei said on Monday that the US feet must be cut off from the region.

Ayatollah Khamenei made the remarks in a meeting with a group of Iranian workers on the occasion of the International Workers’ Day.

Wherever US entered, it created instability, brought misery to people; that’s why the US feet must be cut off from the West Asia.

US must leave this region. The one whose feet should be cut off is the United States, not the Islamic Republic. We belong to this region; the Persian Gulf and West Asia are our home, he said.

‘If they stand against Iran, they will certainly suffer defeat,” he said.

“US officials agitate the Saudis, creating discord and chaos in the West Asia region. Why don’t you try to agitate the Zionists? Because they want to turn Muslims against one another; thus, avoiding the burden of an outcome from confronting the Islamic Republic and the powerful Iranian nation,” he added.

Referring to his visit to an exhibition showcasing Iranian-made goods, the Leader reiterated that workers in the country have successfully overcome all pressures and sanctions and that everybody should bow to their great work and achievements.

Unfortunately, some individuals inside the country avoid supporting Iranian-made products but all people and officials should spare no efforts to support them, Ayatollah Khamenei said.

It is among responsibilities of the government to remove existing barriers faced by entrepreneurs and workers, issues such as insurance, banking, taxation and lack of liquidity, he said.

Supporting Iranian-made products is the best means to fight enemies as they have come to realize that they cannot achieve their ends through wars or military confrontations, he added.

The era of ‘hit and run’ is now over and anyone dare to enter a military confrontation with Iran will be punished severely, the Leader said.

The enemies have focused on economic and cultural wars and the US treasury acts as a room for leading economic wars with the Islamic Republic of Iran, Ayatollah Khamenei said.

Everybody should be vigilant and know that the world is not summarized to the US or some European countries as the world is very big and there are many other countries to establish relations with, he said.
US is the root cause of instability in the West Asia and to the same reason they should be kicked out, the Supreme Leader said.