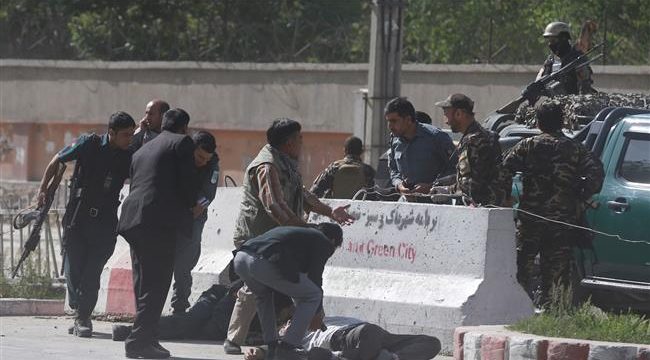 The first bomb attack was carried out by an assailant on a motorcycle, who blew himself up in the Shashdarak area close to the buildings of Afghanistan’s National Directorate of Security in the heart of Kabul, officials said.

Shortly afterwards, a second explosion tore through a group of reporters who had gathered at the site of the first incident outside the headquarters of the Ministry of Urban Development.

AFP has reported that its journalist Shah Marai was among those killed.

There has been no immediate claim of responsibility for the attacks, which came only a week after some 60 people lost their lives when a blast ripped through a voter registration center in the west of Kabul.

Last week, the local Taliban militant group launched its so-called spring offensive in an apparent rejection of the Kabul government’s offer of peace talks. The militants have said the offensive, dubbed Khandaq, would mainly focus on “crushing, killing and capturing American invaders and their supporters.”

The latest rise in attacks comes as Afghanistan is preparing to hold long-delayed legislative elections in July.

Some 17 years into the US-led invasion of Afghanistan, the country is still suffering from insecurity and militancy.

The Taliban militants are active in two-thirds of the country and fully control four percent of it, while Daesh militants have recently established a foothold in the eastern and northern parts of Afghanistan.