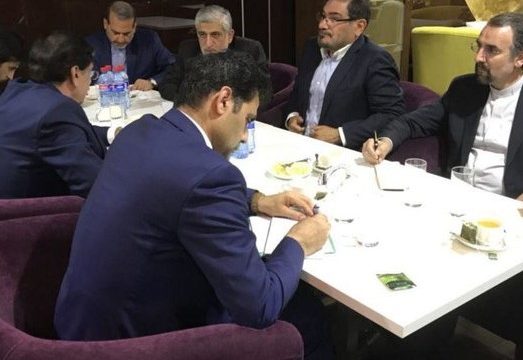 MNA – Rear Admiral Shamkhani, the Secretary of SNSC of Iran told National Security Advisor of Pakistan Janjua on Thursday in Sochi that the only way to put an end to war in Yemen is supporting dialogue between Yemeni sides.

“Activating the political process and supporting Yemeni-Yemeni dialogue is the only path to stopping war and conflict and establishing peace and security in Yemen,” said Rear Admiral Shamkhani, the Secretary of the Supreme National Security Council (SNSC) of the Islamic Republic of Iran.

The Iranian official made the remarks during a bilateral meeting with National Security Advisor of Pakistan Lieutenant General Nasir Khan Janjua, on Thursday morning. The two security officials met on the sidelines of the 9th International Meeting of High Representatives for Security Issues in Russian port city of Sochi.

They discussed political and security developments in the region as well as the current relations between the two countries.

Mr. Shamkhani, in this meeting, for his part, voiced content with the relative improvement in the situation of the joint borderlines and called for increase in contact and cooperation between the security and police entities of the two countries to fully stop the activities of violent gangs which are connected to intelligence services of some countries of the region in the borders.

“We must not allow third countries uninterested in development of ties between Iran and Pakistan based on good neighborliness to negatively affect the bilateral relations,” asserted the Iranian security official.

He underlined that bilateral and multilateral cooperation to counter threats should be activated along with seizing joint economic opportunities in tapping the potentials of Chabahar port [of Iran] and Gwadar port [of Pakistan].

“Iran and Pakistan, as two important countries in the Islamic world, are tasked with important responsibilities in regards to the future of the Islamic Umma,” reassured the Iranian official.

The Pakistani side, for his part, condemned US President Trump’s decision in recognizing Jerusalem al-Quds as the capital of the Zionist regime, reassuring that the Pakistani nation’s will in supporting the cause of Palestine has been unwaveringly unchanged.