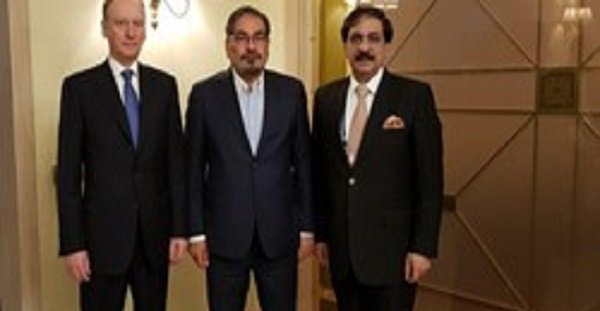 While in Sochi, Shamkhani addressed the meeting and held talks with Pakistan’s National Security Advisor Nasir Khan Janjuai and the Secretary of the Central Political and Legal Affairs Commission of the Communist Party of China Guo Shengkun.

Eventually, Iran, Russia, and Pakistan reached an agreement on Thursday (April 26) to hold a joint security conference with other countries of the region.

Addressing the meeting, Shamkhani rejected any possible agreements between European countries and the United States on the future of the nuclear deal with Iran known as the JCPOA, stressing that for Iran any agreements of such kind would be invalid and worthless, calling on all the parties to live up to their commitments.

Shamkhani also lashed out at Trump administration for violating the nuclear deal, saying Trump not only violates the JCPOA but also other US agreements.

Talking to the Pakistani senior official, Shamkhani reiterated activating the political process and supporting Yemeni-Yemeni dialogue is the only path to stopping war and conflict and establishing peace and security in Yemen.

Iran and Pakistan, as two important countries in the Islamic world, are tasked with important responsibilities in regards to the future of the Islamic Umma,” reassured the Iranian official.

The Pakistani side, for his part, condemned US President Trump’s decision in recognizing Jerusalem al-Quds as the capital of the Zionist regime, reassuring that the Pakistani nation’s will in supporting the cause of Palestine has been unwaveringly unchanged.

Talking to Chinese top official, Skamkhani said, “We take the phenomenon of terrorism as a threat endangering international peace and security even now that terrorists have lost the geography of their presence in Iraq and Syria.”

The Chinese official, in this meeting, in turn, voiced serious concern over the spread of instability and insecurity in the region.

“In addition to approving your stances and approaches, we hold that US, as a country which is secretly supporting the elements of insecurity and instability in the region, is after limiting and inflicting damage on Iran, China, and Russia with levying sanctions,” said Guo Shengkun.

Shamkhani, Janjua and Nikolai Platonovich Patrushev, the Secretary of the Security Council of Russian Federation, agreed that US measures in the region are destabilizing and they voiced serious concerns over them. They called for comprehensive cooperation of all influential Asian countries against the worrisome trend.

The three senior security officials also agreed to continue the exchange of ideas and consultations along with holding dialogue with other countries of the region and inviting them to attend at the agreed press conference.

In a meantime, an informed source in Russian National Security Council announced that the rumors about Moscow’s efforts for mediating between Shamkhani and Israeli National Security Advisor Eytan Ben-David were part of a media hype.

The source noted that neither such a meeting was held between Shamkhani and Eytan Ben-David nor the Russians intended to arrange such a meeting.