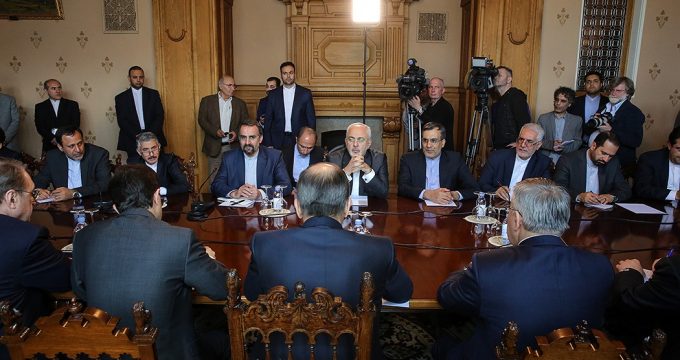 Tasnim – Iran will be signing an agreement with Russia within the next couple of weeks for cooperation through the Eurasian Economic Union (EAEU), Iranian Foreign Minister Mohammad Javad Zarif said Saturday.

In a meeting with his Russian counterpart in Moscow, Zarif hoped for closer economic ties with Russia through direct banking links, expressing delight that Tehran is going to sign a treaty with Moscow within the next few weeks for cooperation in the Eurasian Economic Union structure.

Zarif also hailed Russia’s support for Iran’s nuclear industry on the basis of the international law, saying negotiations will be effective given the concerns about future of the Joint Comprehensive Plan of Action (JCPOA).

The Iranian minister also highlighted the significance of cooperation with Russia in the Caspian Sea.

For his part, Sergei Lavrov voiced willingness to hold extensive talks about the JCPOA amid the current concerning situation.

He also hoped for closer economic relations with Iran, hailing the interaction in the Astana peace process and the Caspian issues.

Foreign ministers of Iran, Russia and Turkey have gathered in Moscow to coordinate political efforts for peace in Syria.

Speaking to reporters on Saturday morning, Zarif described the Astana process as the only initiative that has resulted in actual reduction of tensions in Syria.

Unlike the other initiatives that have gone nowhere, the Astana peace process has seen many meetings at the level of presidents, ministers, deputy ministers and experts over the past year which have resulted in a political process for the settlement of crisis in Syria and a downward trend in tensions on the ground, he added.