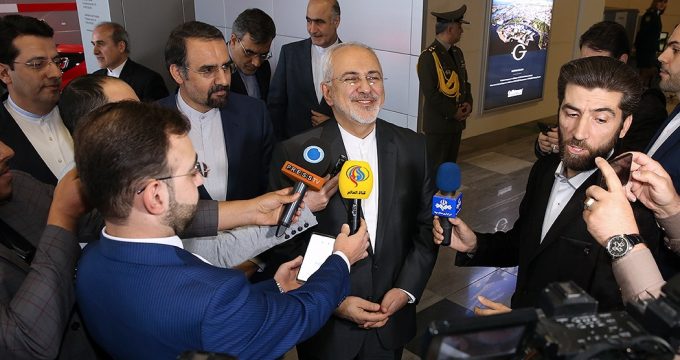 Tasnim – Iranian Foreign Minister Mohammad Javad Zarif lauded the Astana peace process, initiated by Tehran, Moscow and Ankara, as the only initiative that has practically led to the reduction of tensions in the Arab country.

Speaking to reporters on Saturday upon his arrival in Moscow for a ministerial meeting, Zarif described the Astana process as the only initiative that has resulted in actual reduction of tensions in Syria.

Unlike the other initiatives that have gone nowhere, the Astana peace process has seen many meetings at the level of presidents, ministers, deputy ministers and experts over the past year which have resulted in a political process for the settlement of crisis in Syria and a downward trend in tensions on the ground, he added.

Zarif said he will meet his Russia and Turkish counterparts to press on with the Astana and Sochi peace negotiations, particularly after the recent US military attack on Syria that hampered the political settlement of conflicts.

In the trilateral meeting, Iran, Russia and Turkey will stress on the continuation of political efforts and reject any measure damaging Syria’s territorial integrity or sovereignty, Zarif added.

The top Iranian diplomat then noted that his meeting with Russian Foreign Minister Sergei Lavrov would also include talks about the Joint Comprehensive Plan of Action (JCPOA), a nuclear agreement between Iran and the Group 5+1 (Russia, China, the US, Britain, France and Germany).

Earlier this month, the presidents of Iran, Russia and Turkey –the three guarantor states of de-escalation zones in Syria- held a meeting in Ankara to discuss ways for peaceful settlement of the crisis in Syria.