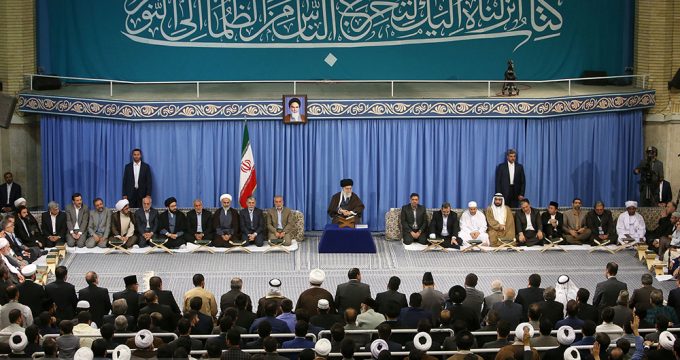 Press TV- Leader of the Islamic Revolution Ayatollah Seyyed Ali Khamenei says the Iranian nation has successfully resisted bullying attempts by arrogant powers thanks to the teachings of the Qur’an, the holy book of Islam.

Ayatollah Khamenei made the remarks at a meeting with competitors of the 35th edition of International Holy Quran Contest in Tehran on Thursday.

The Leader said, “It has been 40 years that the Islamic Republic of Iran has been standing against the bullying of arrogant [powers], and has achieved growing progress, capability and power to the dismay of the enemies, who were seeking to destroy this establishment.”

Ayatollah Khamenei further underlined the need for Muslims to study and understand the Qur’an besides reading and learning it by heart, adding that the “only way” for the Islamic Ummah to make progress and achieve prosperity is for it to implement the guidelines and teachings of the holy book.

“Unfortunately, Muslim countries have been grappling with backwardness and dominance of the infidels, as they do not practice the [teachings] of the Qur’an,” the Leader added.

Due to their failure to follow the guidelines of the Qur’an, certain Muslim countries have been plagued with the “disease of indignity,” the Leader stated.

Ayatollah Khamenei pointed to the “shameful” remarks by US President Donald Trump on Tuesday, who said some Middle Eastern countries would not last a week without US support, saying such comments are rooted in the very same “disease.”

The Leader stressed the need for “unity” among Muslims and expressed sorrow over the fact that some Muslim countries have relations with the Israeli regime.

If Muslims apply the teachings of the Quran in practice, they will definitely have a better future and “the US will no longer be able to threaten and bully the Muslim nations and countries,” Ayatollah Khamenei pointed out.