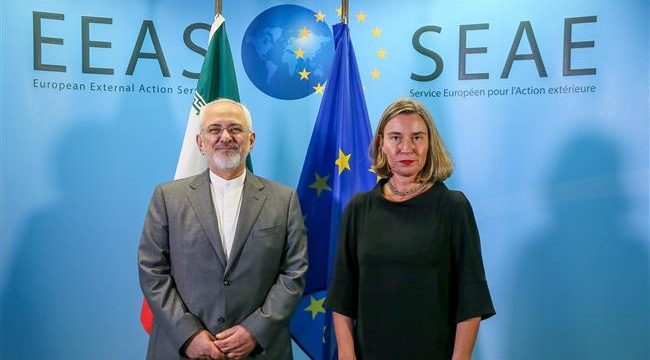 Iran ready to cooperate with other states in Syria reconstruction: FM Zarif

Press TV- Foreign Minister Mohammad Javad Zarif calls the establishment of a ceasefire in Syria a top priority in efforts to end the crisis there, saying Iran is ready for cooperation with other states to help reconstruct the violence-torn Arab country.

Speaking at an international conference on Syria in Brussels on Wednesday, Zarif said Iran has already begun its cooperation with Syria in rebuilding the country and is ready to interact with other countries in this area.

Zarif further described aid delivery to Syrian civilians as a matter of great urgency, saying if relief operations take place without preconditions and political motives, not only will they improve the conditions of the displaced, but will also facilitate efforts to achieve peaceful solutions to the conflict.

According to the EU, nearly 6.1 Syrian are currently internally displaced, over five million have fled the country and 13 million other are in need of assistance.

The UN and EU hold a conference in Brussels to boost humanitarian aid for the Syrian people.

UN children’s agency UNICEF said nearly 2.8 million Syrian children had stopped their education, warning that going to school in some parts of Syria “has at times become a matter of life and death.”

The Iranian foreign minister also pointed to the joint efforts by Iran, Russia and Turkey to broker dialog between Syria’s conflicting sides, saying the three sides are working to further expand the four de-escalation zones created in Syria as part of the ongoing peace process in Astana, Kazakhstan.

The leaders of Turkey, Iran and Russia say they are determined to speed up efforts to ensure “calm on the ground” in Syria.

Zarif further said the Astana process is based on the understanding that the Syria crisis can only be resolved within the framework of a comprehensive political process led by the Syrian people and with complete respect for the sovereignty, national integrity and independence of the Arab country.

The Iranian foreign minister pointed to a recent suspected chemical attack in the Syrian town of Douma, near Damascus, saying Iran, as a country extensively harmed by chemical attacks in 1980s, condemns such attacks by any party under any circumstances.

Zarif underlined the need for an impartial investigation into the matter and condemned any unilateral and illegal military interventions in the Arab country. warning that such actions merely disrupt the peace process and exacerbate the situation.

On April 14, the US, France and Britain carried out missile attacks on a number of targets in Syria in response to the suspected chemical attack that reportedly took place on April 7.

Syria has rejected any role in the alleged attack, which is yet to be investigated.