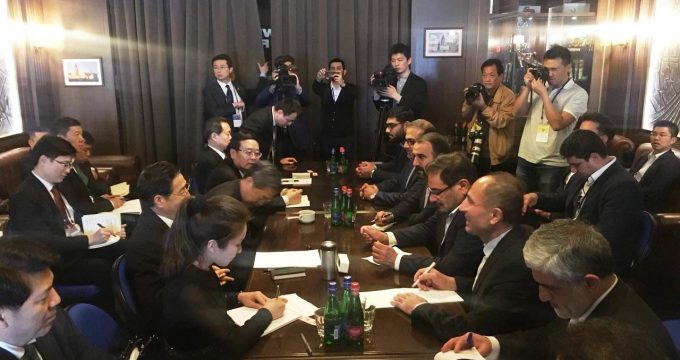 Iran calls for common strategy to counter US hostile measures

IRNA – A top Iranian security official Thursday called for adoption of common strategy by Iran, China and Russia to counter the US measures to hurt the three countries.

Tehran, Moscow and Beijing should take a common strategy to deal with such measures as the three are now on the list of US national security threats, Ali Shamkhani, Secretary of Supreme National Security Council, said in a meeting held in this Russian city with the Chinese Public Security Minister Guo Shengkun.

Shamkhani is in Sochi for a two-day security conference with participation of representatives from 110 countries.

In the meeting, Shamkhani referred to the two countries’ determination to upgrade mutual cooperation to the highest level, stressing the importance of removing existing banking problems.

Touching on the issue of terrorism, Shamkhani said this phenomenum threatens international peace and security.

Takfiri terrorism has lost its places in Iraq and Syria, so the US and its allies in West and region under the pretext of alleged chemical weapons attack by the Syrian government in Douma try to have military presence in the country in order to defend the Takfiri terrorists in Syria, Shamkhani stressed.

About two weeks ago, US ant its French and British allies bombarded Syria, unfoundedly claiming that the Syrian government has used chemical weapons in Douma.

About the resettlement of the terrorist groups in Afghanistan, the Iranian security official said the pro-terrorism countries are now busy transferring the remains of terrorists to Afghanistan and this will seriously endanger the Russian, Chinese and Iranian borders.

Close cooperation among Iran, China, Russia, Pakistan and Afghanistan is necessary for preventing the spread of terrorism in the region, Shamkhani said.