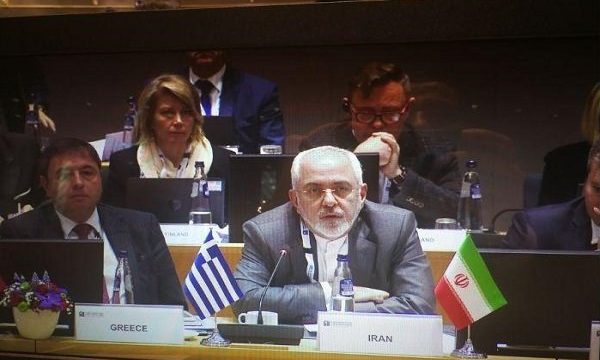 MNA– Iranian Foreign Minister Mohammad Javad Zarif condemned the unilateral military action [of US, UK, and France] against Syria as a measure postponing the attainment of peace in the war-torn country.

“The foreign interventions in Syria have postponed the achievement of peace in Syria,” said Iranian Foreign Minister Mohammad Javad Zarif, on Wednesday in Brussels.

He made the remarks addressing the international conference “Supporting the Future of Syria and the Region” – also known as Brussels II- at the European Council in Brussels.

The Iranian diplomatic chief urged the international community to take the issue of humanitarian concerns as the top priority in considering Syrian crisis and said, “If the humanitarian aides are in line with humanitarian principles, without any pre-set conditions or political motives, they can improve the situation of Syrian refugees and dislocated people and will facilitate the efforts to reach a peaceful resolution for this conflict.”

“Establishing ceasefire should still be our top priority and Iran, along with Russia and Turkey as the three guarantor states of Astana Peace Process, is making efforts to expand the tension-free areas in Syria. This process was formed on this simple concept that Syrian crisis will solely be solved politically in the framework of a real comprehensive procedure led and authorized by the Syrian people themselves and with full respect to territorial integrity, sovereignty and independence of Syria,” asserted Mr. Zarif.

“Iran, which was extensively harmed by chemical weapons in the 1980s, categorically condemns any use of chemical weapons by any party and under any circumstances,” said the Iranian foreign minister referring to alleged chemical attack in Syrian town of Douma.

“We have always insisted on extensive impartial field investigations and at the same time we strongly condemn any unilateral and unauthorized illegal military measures. The foreign interventions have solely postponed the attainment of peace in Syria and worsened the situation,” reiterated the Iranian top diplomat.

“Iran has already started delivering its humanitarian helps to Syrian people, including the dislocated Syrians within the borders of Syria and the trapped people of under-siege areas, actively in the past years,” he said.

“We have already started our cooperation with Syria to reconstruct this country and we are fully ready to interact with others,” Zarif reassured at the closing chapter of his address.