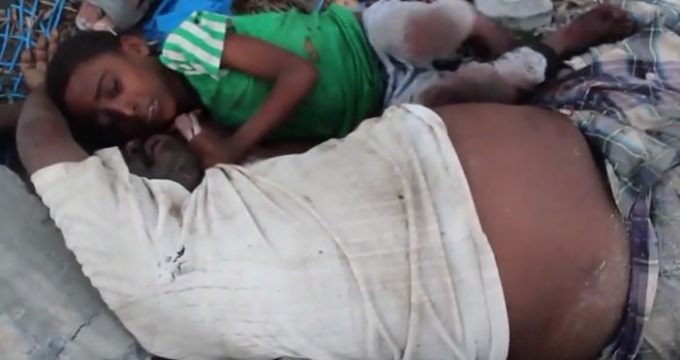 Why Yemeni boy clinging to father’s corpse for hours makes no headlines?

Alwaght– A heartbreaking footage depicting a Yemeni boy who is clinging to his father’s body is not dominating the mainstream media’s prime time because the tragedy happened when fighter jets of Saudi regime, an oil-rich ally of Western states, bombed a wedding party in Yemen’s Hajja Province.

The horrible Photos and footage were taken after the brutal bombing, which happened in a remote village in the northwestern province of Hajja, killing 40, including groom.

The head of Yemen’s Al Jumhouri hospital in Hajjah told Reuters by telephone that the hospital had received 40 bodies, most of them torn to pieces, and that 46 people had been injured, including 30 children.

Appearing to be aged seven or eight, he tightly clenches the body of a man, presumably his father, grabbing his shirt and repeating “No, no, no” as rescuers try to take him away. He most probably did it for hours, judging by how some of the images were taken at night and some in the morning.

But the hapless Yemeni  boy the face of the war in the mainstream media, regardless of how heart-wrenching are his little figure and fruitless defiance. No well-paid anchor with perfect make-up will say in a tearful voice how she cannot look at him. No correspondent will confront the Saudi foreign minister, showing him the pictures, saying: “This is a war crime, sir.” At the UN Security Council, his tragedy will not be used to denounce a criminal regime, killing civilians with impunity. Because the monster that has committed this war crime is Saudi Arabia’s crown prince and defense minister Mohammad bin Salman who has recently made a several weeks-long tour to the US and the Europe signing multibillion dollar arms deals with them.

Therefore, a boy needs to be a bombing victim in another country to get this kind of attention in the West. Somewhere, where the bombs killing civilians are not supplied by the US or the UK. Where obvious signs of malnutrition would not be a silent accusation against Saudi Arabia, which blocks the supply of food, medicine and fuel to people opposing its invasion. One needs to be in Syria, not Yemen.

Saudi Arabia leading an arab coalition has launched a brutal aggression against neighboring Yemen since March 2015 in a bid to restore power to fugitive former president Abd Rabbuh Mansour Hadi.

The Yemeni Ministry of Human Rights announced in a statement on March 25 that the Saudi-led war had left 600,000 civilians dead and injured.

The United Nations says a record 22.2 million people are in need of food aid, including 8.4 million threatened by severe hunger. A high-ranking UN aid official recently warned against the “catastrophic” living conditions in Yemen, stating that there was a growing risk of famine and cholera there.

The MSM apparently have a very selective approach to child victims of militant violence, according to which many are simply not worthy of sympathy and coverage. A blind spot covers the Gaza Strip, where children were hurt and killed in the past week by Israeli regime’s soldiers manning the border wall.

Enjoying media blackout on Yemen’s catastrophe, western-backed Saudi regime continues slaughtering  a nation in cold blood. Early on Tuesday, Saudi warplanes pounded a gas station in Abs District of Yemen’s northwestern Hajjah Province, killing at least 18 civilians and injuring 13 others. Elsewhere, three civilians were killed and 2 more injured in a Saudi airstrike in Saada Province, being simply added to the statistics of the war, eventually making their way to the latest report by the UN or Amnesty International. They are unlikely to affect Saudi Arabia’s ability to purchase Western weapons, receive Western intelligence for bombings, or get refueled in the air.

The UN has also record of turning blinded eye on Saudi Arabia’s war crime in Yemen. In 2017, the UN has added a Saudi-led military coalition to a blacklist of child rights violators for killing and injuring of hundreds of children in war-torn Yemen. However, facing bullying, threats and pressure from Riyadh at its allies, the world body was forced to remove the regime from its blacklist.