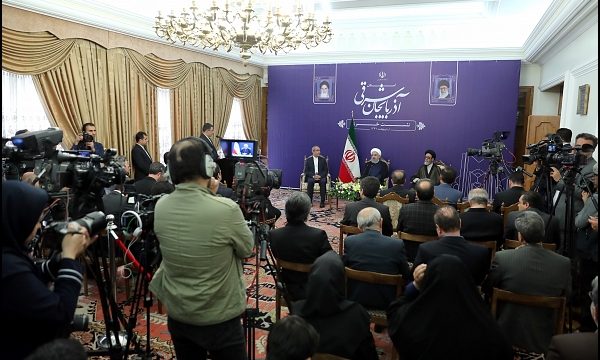 Not a single sentence to be added or removed from JCPOA

Stressing that, “Not a single sentence will be added or removed from the Joint Comprehensive Plan of Action (JCPOA),” President said: “Currently, the United States is on trial, because it hasn’t lived up to its commitments and if Europe wants to satisfy Trump, it better spend out of its own pocket, not Iran’s”.

Secretary of Iran’s Supreme National Security Council (SNSC) Ali Shamkhani warned the regional states of the West’s plots to coax them into piling up more weapons and military equipment, stressing that arms depots could never maintain their security.

President Donald Trump and Iran’s top diplomat have traded sharp warnings, with Trump threatening “bigger problems” than ever if Tehran restarts its nuclear program. Foreign Minister Mohammad Javad Zarif put the president on notice, telling The Associated Press if the U.S. pulls out of the nuclear deal, Iran “mostly likely” would abandon it, too.

Supreme Leader of the Islamic Revolution underlined the importance of spreading philosophy and rational sciences in Tehran and Qom seminaries.

Iranian Foreign Minister Mohammad Javad Zarif and his German counterpart Heiko Maas have exchanged views on the restoration of peace to Syria.

Iran’s top security official says the illegitimate military presence of certain countries in Syria is meant to put the Takfiri terrorists, who have suffered defeat in the region, back on their feet.

EU foreign policy chief Federica Mogherini says the current deal with Iran is working effectively to keep Tehran from developing nuclear weapons and should be preserved for the future.

The Kremlin is in favor of preserving the Joint Comprehensive Plan of Action (JCPOA) on Iran’s nuclear program, since it is hardly possible to repeat the meticulous work done while preparing it.

US definite policy in the Middle East is to create insecurity and instability in order to expand its presence and military bases, sell more weapons, and interfere in the region, said the Secretary of the Supreme National Security of Iran Ali Shamkhani on Wednesday.