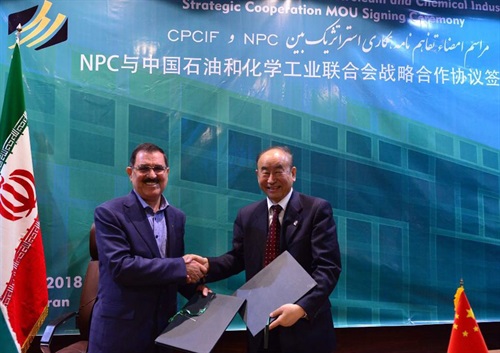 SHANA – Iran’s National Petrochemical Company (NPC) and the China Petroleum and Chemical Industry Federation (CPCIF) signed a memorandum of understanding (MoU) for construction of a petrochemical park in Iran by Chinese companies.

Speaking about the deal, NPC Director in Investment Hossein Alimorad said it was signed subsequent to an agreement between the presidents of Iran and China back in 2015 for bolstering bilateral relations in the energy section, especially in the petrochemical industry.

He said, based on the MOU, the NPC and China’s NDRC will pursue enhancement of petrochemical relations between the two countries and the project will be constructed after precise considerations by the two sides.

NPC, as the sole custodian of development of the petrochemical industry in Iran, will provide the paramount land for construction of the park by Chinese companies, added Alimorad.