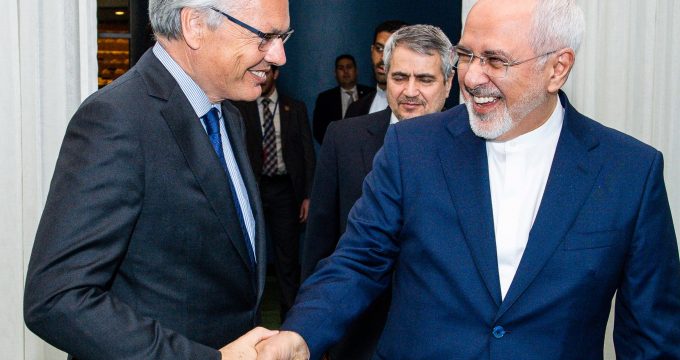 Iran, Belgium urge all parties to remain committed to JCPOA

IFP- Iranian Foreign Minister Mohammad Javad Zarif, who is in New York to attend the High-Level Meeting on Peace-building and Sustaining Peace, has held talks with his Belgian counterpart Didier Reynders.

During the Monday talks, the two sides exchanged views on the most important issues in bilateral relations as well as the latest regional and international developments.

Zarif and Reynders underlined the significance of expanding bilateral ties, particularly in making further investments in Iran, and urged all involved sides in the Iran nuclear deal to remain committed to their pledges under the accord.

Earlier in the day, Zarif said in a post on his official Twitter account that the European signatories to the Joint Comprehensive Plan of Action (JCPOA) should convince US President Donald Trump not to pull out of the deal, because there is no “Plan B” for it.

“It’s either all or nothing. European leaders should encourage President Trump not just to stay in the nuclear deal, but more importantly to begin implementing his part of the bargain in good faith,” he noted.

Trump is a stern critic of the nuclear deal reached between Iran and the five permanent members of the UN Security Council – the United States, France, Britain, China, Russia – plus Germany in 2015.

Under the agreement, nuclear-related sanctions put in place against Iran were lifted in exchange for curbs on Tehran’s nuclear program.