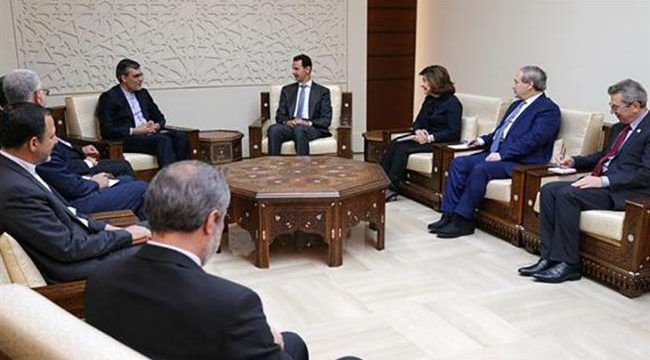 In a meeting with Iranian Foreign Minister’s Special Assistant for Political Affairs Hossein Jaberi Ansari in Damascus on Monday, he emphasized that Syria’s battle against terrorism would continue until control is recovered all over the Arab country’s territory.

He added that the United States, Britain, France and their pawns in the region have been supporting terrorists since the start of the terror fight in Syria.

On April 14, the US, France and Britain carried out missile attacks on a number of targets in Syria in response to a suspected chemical attack in the Syrian town of Douma, near Damascus, that reportedly took place on April 7. Syria has rejected any role in the alleged attack, which is yet to be investigated.

According to the Russian Defense Ministry, the Syrian army shot down 71 out of the 103 missiles fired during the attack, using Russian-made air defense systems, including S-125, S-200, as well as the Buk and Kvadrat units.

The alleged chemical weapons attack reportedly killed at least 60 people and wounded more than 1,000 others in the town, located in Eastern Ghouta on the outskirts of the capital Damascus.

Iranian President Hassan Rouhani on April 14 denounced the US-led coalition’s airstrikes against Syria, saying such attacks run counter to the principles of international law and are considered a blatant support for terrorism.

The Iranian president says the airstrikes by the US, Britain and France against Syria are a blatant support for terrorism.

“At a time that terrorists are suffering a defeat in Syria on a daily basis, such aggressive act certainly means support for these defeated groups,” Rouhani said in a telephone conversation with the Syrian president.

The Iranian official, for his part, briefed Assad on the Islamic Republic’s political efforts aim to help end the war on Syria.

Jaberi Ansari said great victories made by the Syrian Army and its allies against terrorists motivated the US-led coalition to carry out the military attack on Syria.

He added that Washington, Paris and London were worried about the continuation of such victories at the same pace and their spread to new areas.

The Iranian diplomat and Syrian president stressed the importance of maintaining cooperation and coordination between Tehran and Damascus to serve the two nations’ interests and promote stability in the region.

In a message to his Syrian counterpart on Saturday, President Rouhani said the Islamic Republic is fully prepared to help Syria with the reconstruction of the war-ravaged country.

The Iranian president says Tehran is prepared to fully help Syria with its reconstruction.

“Just as it stood by the Syrian people in their fight against terrorism, the government of the Islamic Republic of Iran is ready to stand by you in Syria’s reconstruction employing all it has in power,” the Iranian president said.