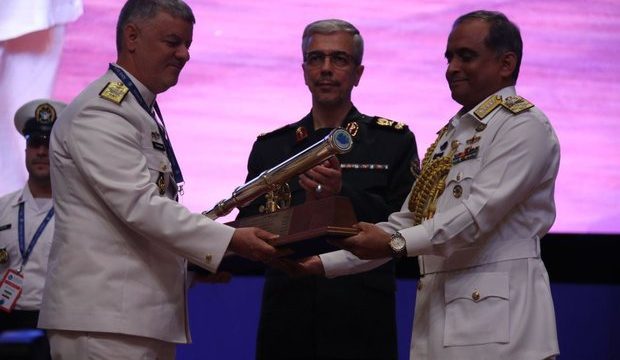 MNA – The rotating presidency of the Indian Ocean Naval Symposium (IONS) has been officially handed over to the Navy of Islamic Republic of Iran Army for a two-year term.

During the 6th IONS currently underway at Espinas Palace Hotel in Tehran, the Chief of Naval Staff of Bangladesh, Admiral Mohammad Nizamuddin Ahmed, handed over the presidency of the Indian Ocean Naval Symposium to Iran in a symbolic gesture by giving a telescope to the Iranian Navy Commander Rear Admiral Hossein Khanzadi.

Bangladesh has been holding the IONS presidency from 2016 to 2018. Iran will now take over for the next two-year period.

A commemorative stamp for the 2018 IONS was also jointly stampped by Iranian Army Chief Bagheri, Rear Admiral Khanzadi, and the Bangladeshi Chief of Naval Staff.

The Indian Ocean Naval Symposium (IONS) is a forum aimed at building an effective maritime security architecture to increase maritime cooperation among the littoral states of the Indian Ocean Region.

The inaugural IONS Seminar was held by the Indian Navy in 2008, followed by biennial seminars in United Arab Emirates in 2010, South Africa in 2012, Australia in 2014 and Bangladesh in 2016.

France will take over the rotating presidency of IONS in 2020.