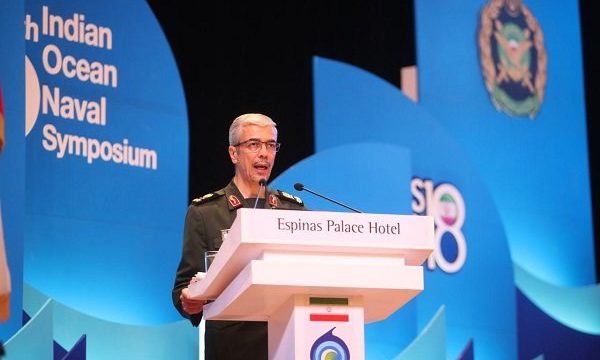 Iran never to bow to US, allies: Army chief

MNA – The Islamic Republic of Iran will never bow to the will and pressure of the US and its allies, and will continue to expand self-sufficient cooperation with neighboring countries, Iranian army chief Bagheri said Monday.

Chief of General Staff of Iranian Armed Forces Major General Mohammad Bagheri made the remarks in his address at the 6th Indian Ocean Naval Symposium (IONS), which kicked off in Tehran Mon. morning with participation of 35 high-ranking military delegations from across the world.

Bagheri went on to add that the traditional bipolar world order has disintegrated in the face of the emergence of new powers in the West and the East; “but certain powers and regional actors are unwilling to accept the facts of the new world,” he added.

“The US’ support for ISIL has devastated a large part of the West Asia and caused the displacement and death of many people,” Bagheri said.

He said the recent missile attack by US, UK and France against Syria was a “clear example of an illegal behavior”, adding “they export weapons to various countries in the region such as Saudi Arabia to plunge the Middle East into war.”

Any change in the security situation of the Indian Ocean will directly affect the security of other regions in the world, he said.

The army chief also voiced Iranian Armed Forces’ readiness to share experiences and expertise with other countries in the fight against terrorism.

“Our Navy has sent 51 flotillas to the Indian Ocean to engage with pirates and preserve marine security,” he said. “Meanwhile, the widespread military presence of certain major powers and their interventions in the Indian Ocean region has caused nothing but further insecurity, such as the relentless airstrikes on Yemeni people.”

The 6th IONS is gathering 35 high-ranking military delegations from across the world, including India, Turkey, and Australia. Iran will take over the presidency of the Indian Ocean Naval Symposium (IONS) for a two-year term.