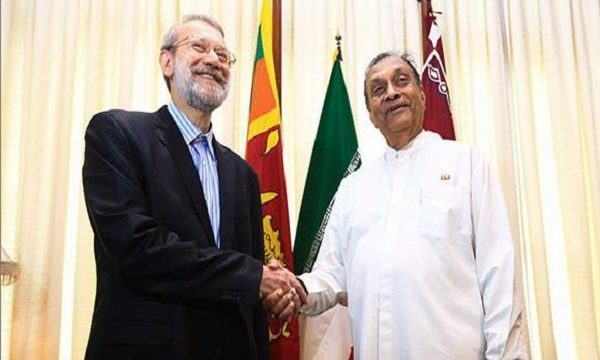 Larijani’s stop in Colombo features meetings with top  Sri Lankan officials including Prime Minister Ranil Wickremesinghe and his counterpart Karu Jayasuriya and participation in a meeting between the members of Ceylon Chamber of Commerce and Iranian economic activists.

In a meantime, Larijani also attended at a banquet held for his honor at Iran’s embassy in Colombo and urged the Iranian embassies in foreign countries to contribute to economic relations of Iran with other countries.

Talking to Wickremesinghe, Larijani said the two countries chambers of commerce can be very helpful in expansion of bilateral ties.

“Considering the lengthy background of trade relations between Iran and Sri Lanka, the chambers of commerce of the two countries can play a bold role with their familiarity with the areas of cooperation,” said Larijani.

The Sri Lankan premier in this meeting, for his part, reassured that Sri Lanka is after normalizing relations with the Islamic Republic of Iran.

He voiced hope that the level of economic ties between the two countries grow in consistent with the growth in political relations.

Talking to Jayasuriya, Larijani reiterated the Iranian parliament has approved signing of the exchange of prisoners’ treaty with Sri Lanka and it can be put into practice.

Jayasuriya, in this meeting, in turn, called for expansion of trade interactions between Iran and Sri Lanka and stated that his country is willing to broaden commercial ties with Iran.

Addressing the meeting between the members of Ceylon Chamber of Commerce and Iranian economic activists, Larijani stressed Iran and Sri Lanka have always had friendly ties in all eras and even at the time that Sri Lanka was grappling with domestic issues Iran was beside this country offering help.

He added that the political consultations on important international issues are still in place between the two governments and parliaments of Iran and Sri Lanka.

Talking to reporters in Colombo, Larijani asserted that Iran and Sri Lanka should increase their trade interactions and develop political and trade ties.

He noted that Iran has always have had good relations with Sri Lank in areas of trade and politics, although with tides and ebbs but it has always been in place.

Eventually on Friday, Larijani finished his 6-day tour to Vietnam and Sri Lanka and backed home.