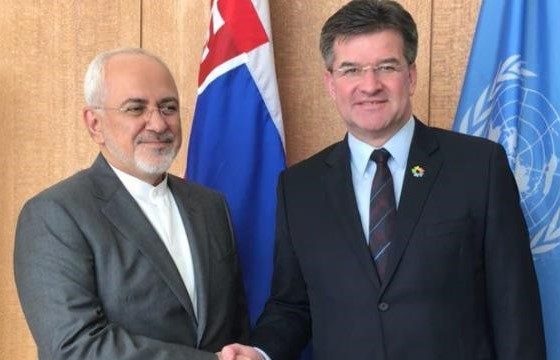 Zarif arrived in New York on Thursday evening and elaborated on the purpose of his trip and also on Iran nuclear deal.

In an interview with American media CBS, he said that the Joint Comprehensive Plan of Action (JCPOA) and Syrian issues are among the most important topics to be discussed during his tour to New York.

The event is to be held on April 24-25 in the United Nations General Assembly (UNGA).

Zarif is to deliver a speech on April 24.

UNGA President Miroslav Lajcak will convene the high-level meeting to assess efforts undertaken and opportunities to strengthen the UN’s work on peacebuilding and sustaining peace.

As specific objectives, the meeting will reflect on how to: 1) Adjust to the new UN approach to peace with the emphasis on conflict prevention; 2) Strengthen operational and policy coherence within the United Nations system towards peacebuilding and sustaining peace; 3) Increase, restructure and better prioritize funding to United Nations peacebuilding activities; 4) Strengthen partnerships between the UN and key stakeholders in the field; 5) Address the root causes of conflict to sustain peace; 6) Address the role of women and youth in peace building.