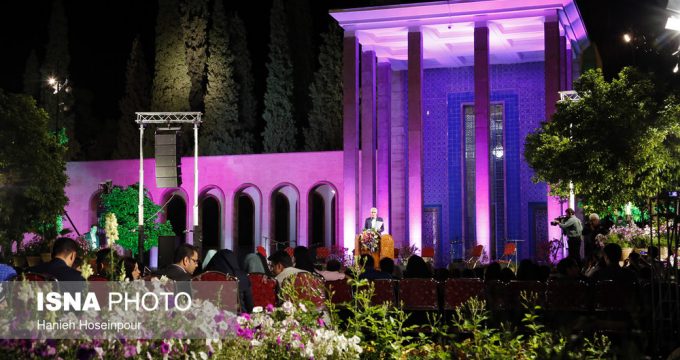 World to mark Day of Sa’adi, master of Persian prose and poetry

Press TV – Aficionados of literature across the world and in Persian-speaking countries are preparing to commemorate the Day of Sa’adi of Shiraz, the world-renowned Persian poet and literary scholar of the medieval period.

In Iran, Sa’adi’s mausoleum in the southern city of Shiraz will host the festivities on April 20 and 21, with dozens of country officials and prominent artists and scholars attending the ceremonies.

During the two-day ceremonies, academic conferences, traditional music concerts, art performances as well as photography and calligraphy galleries will be held at the tomb of Sa’adi.

The city of Shiraz will also see street music festivals, while special posters and paintings for Sa’adi Day will be displayed on buses and billboards across the city.

In the capital city of Tehran, the Center for Sa’adi Studies is scheduled to hold a conference, named “Sa’adi and Petrarca” on April 20 and 21 in collaboration with the Sapienza University of Rome and University of Bologna.

The conference will focuses on comparison of the works and ideas of Sa’adi and 14th century Italian scholar and poet Francesco Petrarca. Prominent linguists, philosophers and literary scholars are scheduled to deliver lectures at the confab.

Similar events are also set to be held in several cities across Iran, Afghanistan, Tajikistan, India and other countries.

Life of journeys and observation

Sa’adi, along with Rumi and Hafez, is regarded as one of the three main pillars of ghazal (love poem) in Persian poetry.

Born in the Iranian city of Shiraz in 1208, Sa’adi is often referred to as the Master of Prose and Poetry in the Persian literature and he has been globally praised for expressing his deep social and moral thoughts in a style which is famous for being “simple but impossible to imitate.”

Sa’adi studied Islamic sciences, law, governance, history, Arabic literature and Islamic theology at the Nizamiyya University in Baghdad and set off for a three-decade journey to foreign lands after the Mongols invaded Iran in 1220s.

In his books Bustan and Golestan, Sa’adi tells many colorful anecdotes of his travels through Anatolia and the Levant where he was captured by Crusaders at Acre and spent seven years as a slave digging trenches outside its fortress.

After freedom, he visited Jerusalem al-Quds and then went on a pilgrimage to Mecca and Medina and visited the other parts of the Arabian Peninsula.

The Mongol invasions forced Sa’adi to live in many desolate areas and refugee camps where he met bandits and displaced ordinary people, religious scholars, Sufis, intellectuals and formerly wealthy merchants and commanders.

For over twenty years, Sa’adi continued exchanging views with people from different walks of life, reflecting upon the agony of people’s lives during the turbulent times of the Mongol invasion.

Later, the prominent poet befriended a Turkic Emir named Tughral and joined him in his journeys to Central Asia, different parts of the Indian subcontinent, including Gujarat where he became familiar with Hinduism and Brahmanism.

After almost three decades, Sa’adi returned to Shiraz before 1257, when he finished composition of Bustan. At that time, his home region of Fars, which was enjoying an era of relative tranquility under an art-loving ruler, welcomed Sa’adi with great respect as a prominent Iranian figure.

Sa’adi is best-known for his books Bustan and Golestan as well as a number of masterly odes portraying human experiences.

Bustan (The Orchard), completed in 1257, is entirely in verse and consists of stories about human virtues, including justice, liberality, modesty, contentment and reflections on the spiritual realms of life.

Golestan (The Rose Garden) which demonstrates Sa’adi profound awareness of the absurdity of human’s mundane routine life and mortal nature of existence was completed in 1258. The book is mainly in prose and contains stories and personal anecdotes, combined with a variety of short poems which contain aphorisms, humorous points and pieces of advice.

Apart from Bustan and Golestan, Sa’adi also composed a book of love poems (ghazals), as well as a number of odes, quatrains and short pieces in both Persian and Arabic.

The far travelled master realistically introduces his rich experience of life though the eyes of both a Sufi and a travelling merchant, who according to Sa’adi are “two almond kernels in the same shell.”

The prominent poet was first introduced to the Western world by the 17th century French orientalist Andre du Ryer through a partial French translation of Golestan in 1634.

In 1654, German scholar Adam Olearius presented a complete translation of both Bustan and Golestan into German.

Sa’adi is particularly known across the world for one of his aphorisms which admires unity among all human beings, regardless of illusionary borderlines:

For they’re created of the same clay.

Should one organ be troubled by pain,

Others would suffer severe strain.

Thou, careless of people’s suffering